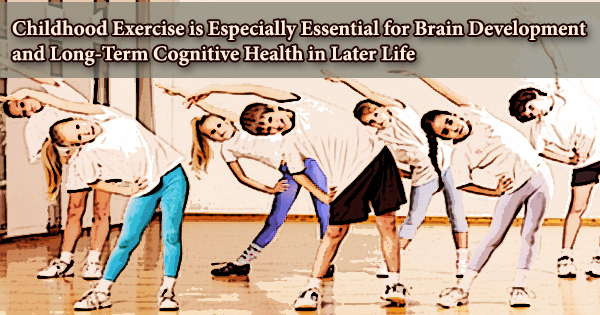 Professor MATSUDA Tetsuya of Tamagawa University’s Brain Science Institute (Machida City, Tokyo; Director: SAKAGAMI Masamichi) and Assistant Professor ISHIHARA Toru of Kobe University’s Graduate School of Human Development and Environment have uncovered the changes in the brain’s neural network and cortex structure that underpin the positive association between childhood. On May 23, 2021, these results were published in the scholarly journal NeuroImage.

Physical activity during youth (up to the age of 12) is linked to better cognitive performance later in life, according to the study.

They were unable to detect a link between cognitive performance and post-adolescent physical exercise, however.

The development of the brain’s network is vulnerable to environmental and experience-related variables during childhood. Exercise at this time is considered to maximize brain network development and is connected to the maintenance and enhancement of cognitive performance later in life.

Exercise throughout childhood has been found to impact the development of cognitive skills in studies conducted over the last decade. These benefits of childhood exercise have now been shown to extend to the preservation and promotion of cognitive functioning in middle age and later life, according to new research. However, the functional and structural changes in the brain linked to this beneficial connection have yet to be discovered. This study looked at the link between childhood physical exercise and later-life cognitive function, utilizing MRI (magnetic resonance imaging) to reveal the structural and functional changes in the brain that underpin this relationship.

The researchers examined the relationship between childhood exercise and cognitive performance, as well as the underlying functional and structural neural networks and cortical anatomy, in 214 people ranging in age from 26 to 69. A questionnaire was used to measure childhood exercise. A Go/No-go task was used to assess one element of cognitive function: reaction inhibition (the capacity to resist incorrect responses).

The structural and functional connections, cortical thickness, myelination, the degree of neurite orientation dispersion, and density index were all determined using the MRI imaging data. According to the Human Connection Project, the brain was split into 360 regions, with functional and anatomical characteristics acquired for each area.

Information from the questionnaire was utilized as confounders in the statistical analysis. This covered each participant’s educational history, educational background of their parents, number of siblings, and adult exercise.

To begin, the researchers looked at the link between childhood activity and Go/No-Go task performance (false alarm rate). Participants who exercised during their childhood (up until the age of 12) had a reduced risk of false alarms than those who did not. Furthermore, this link was discovered independent of the participant’s age. Task performance and post-childhood exercise, on the other hand, were shown to have no such link.

The researchers next looked at structural and functional brain connections in relation to Go/No-go task performance in children who had previously exercised. They demonstrated that there were positive and negative correlations in terms of anatomical connectivity in the brain between childhood exercise and the false alarm rate in the Go/No-go task based on these findings. Over half (73%) of structurally connected locations that were positively related with the Go/No-go task false alert rate had large-scale network connectivity.

Inter-hemispheric connection, on the other hand, was identified in the majority (88%) of structurally linked regions that were adversely related to the task’s false alarm rate. In terms of functional connections, connections with favorable relationships with the Go/No-go task false alarm rate were observed in participants who exercised throughout infancy, but no connections with negative correlations were found.

Task performance was shown to be inversely correlated with cortical density and favorably correlated with neurite orientation dispersion and density. The above findings show that persons who exercised as children had more modular segregation and stronger inter-hemispheric connections in their brain networks, which lowered the amount of errors they made in the Go/No-go task.

Module: A single unit that joins with others to build a system’s overall structure. The human brain is split into a variety of large-scale networks made up of many regions, and it has a distinct modular structure.

Human Connection Project: This large-scale research effort, which began in 2012 throughout North America, aims to improve our knowledge of brain connections.