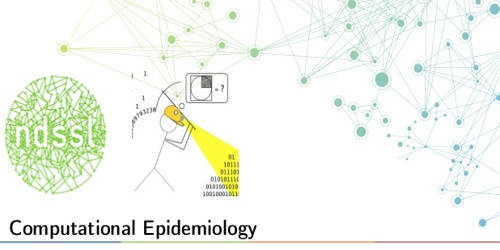 Computational epidemiology is a multidisciplinary field that uses techniques from computer science, mathematics, geographic information science, and public health to better understand issues central to epidemiology such as the spread of diseases or the effectiveness of a public health intervention. A primary concern of epidemiologists is investigating the spread of infectious diseases. It has become increasingly multidisciplinary and has led to novel computational methods for understanding and controlling Spatio-temporal disease spread. The Computational Epidemiology lab aims to tackle this problem by using computer-based simulation models and by taking advantage of the proliferation of smartphones and other mobile technology to collect data as it pertains to public health. Computer Scientists can provide powerful tools for epidemiologists to study such diseases.

In contrast with traditional epidemiology, computational epidemiology looks for patterns in unstructured sources of data, such as social media. An epidemic is said to arise in a community or region when cases of an illness or other health-related events occur in excess of normal expectancy. It can be thought of as the hypothesis-generating antecedent to hypothesis-testing methods such as national surveys and randomized controlled trials. It is impossible to obtain an accurate, detailed, time-varying urban-scale human social contact network by simple measurements. A mathematical model is developed which describes the observed behavior of the viruses, based on the available data. Then simulations of the model are performed to understand the possible outcomes given the model used. By analyzing past outbreaks, epidemiologists are working to pinpoint factors that will most influence outbreaks in the future. The role of individual behavior and public policies is critical in understanding and controlling epidemics computational techniques that provide a potentially powerful.

Computational epidemiology is an interdisciplinary area setting its sights on developing and using computer models to understand and control the spatiotemporal diffusion of disease through populations. These simulations produce as results projections which can then be used to make predictions or verify the facts and then be used to plan interventions and meters towards the control of the disease’s spread. The models may range from descriptive, for example, static estimates of correlations within large databases, to generative, for example, computing the spread of disease via person-to-person interactions through a large population. Through the use of these tools, the lab aims to increase understanding of health policy tradeoffs and improving public health outcomes on a population-wide scale.