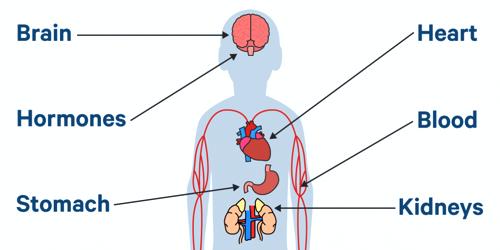 Effects of Lead on Human Body

Effects of Lead on Human Body

Lead is a naturally occurring toxic metal found in the Earth’s crust. Its widespread use has resulted in extensive environmental contamination, human exposure and significant public health problems in many parts of the world.

Lead, which affects many cellular processes and enzyme systems all over the body, has different possible mechanisms of action. Most research on lead poisoning focuses more on its toxicity effects on the hematology, cardiovascular, renal, and neurotoxicities with the emphasis toward the neurological effects of lead poisoning. Yet, the other areas of concern were also plentiful from this research. At a theoretical level, mechanisms of lead toxicity on the reproductive system of male were not yet fully explained. Numerous pathways are possible to clarify how exposure to lead could decrease fertility in male. For example, multiple potassium and calcium channel isoforms in human spermatozoa and testes might be contributed in the earlier activities of acrosome reaction. Lead disrupts the normal physiologic processes in the CNS due to the similarity of ionized lead to calcium, as both are divalent cations. However, lead can disrupt the physiologic effects of calcium at concentrations lower than those of calcium. Lead causes an inappropriate release of neurotransmitter at rest and competes with calcium to interfere with evoked neurotransmitter release.

Chronic lead nephropathy or chronic tubulointerstitial nephritis (as seen on biopsy) occurs in the setting of long-term lead exposure and is often associated with hypertension and gout.

In the kidneys, lead can give rise to Fanconi-like syndromes, chronic (lead) nephropathy, and gout due to lead-induced hyperuricemia. Lead impairs heme synthesis and therefore can give rise to anemia.

Lead not only reduces the sperm count in males but also increases abnormal sperm frequencies as well. At present, its role in male or female infertility is controversial. There is an association between high lead exposure levels and adverse outcomes in pregnancy, but this association becomes equivocal women exposed to lower environmental levels of lead are evaluated.

Lead has been classified as group 2B carcinogen in animals, but data to support its role in human carcinogenesis are insufficient.

Lead can have serious consequences for the health of children. At high levels of exposure, lead attacks the brain and central nervous system to cause coma, convulsions and even death. Children who survive severe lead poisoning may be left with mental retardation and behavioural disorders. At lower levels of exposure that cause no obvious symptoms, and that previously were considered safe, lead is now known to produce a spectrum of injury across multiple body systems. In particular lead affects children’s brain development resulting in reduced intelligence quotient (IQ), behavioural changes such as reduced attention span and increased antisocial behaviour, and reduced educational attainment. Lead exposure also causes anaemia, hypertension, renal impairment, immunotoxicity and toxicity to the reproductive organs. The neurological and behavioural effects of lead are believed to be irreversible.