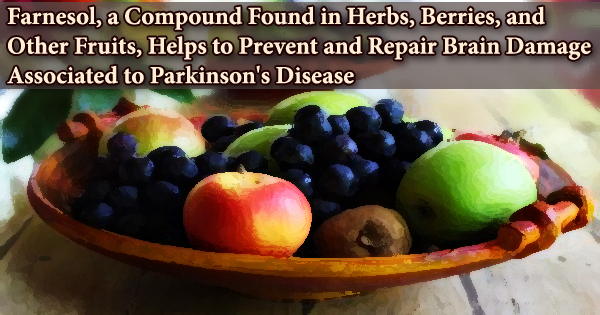 Farnesol, a Compound Found in Herbs, Berries, and Other Fruits, Helps to Prevent and Repair Brain Damage Associated to Parkinson’s Disease

In rodent experiments, researchers from Johns Hopkins Medicine have contributed to evidence suggesting the chemical farnesol, which is present naturally in herbs, berries, and other fruits, protects and cures brain damage associated to Parkinson’s disease. By inhibiting PARIS, a crucial protein implicated in the disease’s development, the flavoring and scent ingredient can halt the loss of dopamine-producing neurons in mice’s brains.

The loss of these neurons impairs movement and cognition, resulting in tremors, muscular stiffness, disorientation, and dementia, which are all typical signs of Parkinson’s disease. According to the researchers, farnesol’s ability to inhibit PARIS might help in the creation of novel Parkinson’s disease treatments that particularly target this protein.

The disease was named after English doctor James Parkinson, who described it in full for the first time in 1817 in An Essay on the Shaking Palsy. World Parkinson’s Day (April 11th, the birthdate of James Parkinson) and the usage of a red tulip as the disease’s emblem are examples of public awareness efforts.

According to Ted Dawson, M.D., Ph.D., director of the Johns Hopkins Institute for Cell Engineering and professor of neurology at the Johns Hopkins University School of Medicine, “Our experiments showed that farnesol both significantly prevented the loss of dopamine neurons and reversed behavioral deficits in mice, indicating its promise as a potential drug treatment to prevent Parkinson’s disease.”

The new study’s findings, which were published on July 28 (2021) in Science Translational Medicine, describe how the researchers discovered farnesol’s potential by screening a huge library of medicines for PARIS inhibitors. An accumulation of PARIS in the brains of patients with Parkinson’s disease inhibits the production of the protective protein PGC-1alpha.

Parkinson’s disease is typically inherited, although not always, and some types have been related to specific gene alterations. The protein protects brain cells from the harmful effects of reactive oxygen molecules that build up in the brain. Dopamine neurons die without PGC-1alpha, resulting in the cognitive and physical abnormalities associated with Parkinson’s disease.

The researchers offered mice either a farnesol-supplemented diet or a standard mouse diet for one week to see if farnesol could protect brains against the consequences of PARIS buildup. The researchers next gave the mice pre-formed fibrils of the protein alpha-synuclein, which has been linked to the brain consequences of Parkinson’s disease.

The mice on the farnesol diet performed better on a strength and coordination test meant to detect the progression of Parkinson’s disease symptoms, according to the researchers. The mice performed 100 percent better than animals fed a normal diet but injected with alpha-synuclein.

The researchers discovered that mice fed a farnesol-enriched diet had twice as many healthy dopamine neurons as mice not fed the farnesol-enriched diet when they examined brain tissue from the two groups. In addition, farnesol-fed mice had 55 percent more of the protective protein PGC-1alpha in their brains than untreated mice.

The researchers verified that farnesol attaches to PARIS, altering its structure such that it can no longer interfere with PGC-1alpha synthesis in chemical tests. While farnesol is generated naturally, synthetic forms are utilized in commerce, and the quantity of farnesol people consume through their food is unknown.

The researchers warn that human safe dosages of farnesol have yet to be identified, and that this can only be done through carefully controlled clinical studies. Despite the need for additional study, Dawson and his team are optimistic that farnesol will one day be utilized to develop therapies that prevent or repair the brain damage caused by Parkinson’s disease.