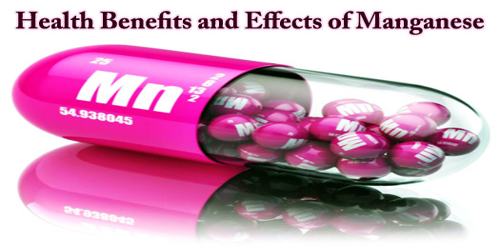 Health Benefits and Effects of Manganese

Manganese is a mineral that is found in several foods including nuts, legumes, seeds, tea, whole grains, and leafy green vegetables. It is considered an essential nutrient, because the body requires it to function properly. People use manganese as medicine.

Manganese is vital for the human body, but people only need it in small amounts. It is used for prevention and treatment of manganese deficiency, a condition in which the body doesn’t have enough manganese. It is also used for weak bones (osteoporosis), a type of “tired blood” (anemia), and symptoms of premenstrual syndrome (PMS).

The human body cannot produce manganese, but it can store it in the liver, pancreas, bones, kidneys, and brain. A person usually obtains manganese from their diet. Manganese is sometimes included with chondroitin sulfate and glucosamine hydrochloride in multi-ingredient products promoted for osteoarthritis.

Manganese helps make and activate some of the enzymes in the body. Enzymes are proteins that help the body carry out chemical reactions, such as breaking down food.

Manganese is found in a variety of foods, including:

Manganese helps form an antioxidant enzyme called superoxide dismutase (SOD). Antioxidants shield the body from free radicals, which are molecules that destroy or damage cells in the body. The authors of a 2011 study found that SOD helps break down one of the more dangerous free radicals, called superoxide, into smaller components that are not harmful.

In laboratory and animal models, this process could reduce inflammation related to lung pleurisy, inflammatory bowel disease, and psoriasis. More research is necessary to prove the benefits of these antioxidants in the human body, however.

Early research suggests that taking manganese along with calcium helps improve symptoms of Premenstrual syndrome (PMS), including pain, crying, loneliness, anxiety, restlessness, irritability, mood swings, depression, and tension. Researchers aren’t sure whether the improvement is due to the calcium or the manganese.

Taking a specific product (Cosamin DS from Nutramax Laboratories) containing manganese, glucosamine hydrochloride, and chondroitin sulfate by mouth for 4 months improves pain and the ability to do normal activities in people with osteoarthritis of the knee and the lower back. However, many studies show that taking glucosamine plus chondroitin without manganese can help treat osteoarthritis. Therefore, the effects of manganese are unclear.

Manganese may help promote strong, dense bones when combined with other nutrients, such as calcium and vitamin D. Although some earlier studies have suggested that manganese could make bones denser, more recent research has noted that calcium and vitamin D are the most significant promoters of good bone health.

Drinking water can also contain small amounts of manganese. However, too much manganese in the water supply can be toxic.

A person can take manganese supplements if their doctor believes that they have a deficiency. There is no daily recommended intake of manganese, but the Adequate Intake (AI) is 2.3 milligrams (mg) per day for adult men and 1.8 mg per day for adult women.

Taking high doses of manganese for long periods of time might cause muscle pain, nerve damage and other symptoms, such as fatigue and depression.

The most significant risk related to manganese is for people who work in an environment where they might inhale it. Smelting and welding are two high-risk activities for accidental manganese inhalation. Inhaled manganese is dangerous because the body transports the mineral directly to the brain without first processing it for proper use. Over time, inhaled manganese can lead to a serious condition called manganism. Manganism is similar to Parkinson’s disease.

Manganese is Likely Safe in pregnant or breast-feeding adult women aged 19 or older when taken by mouth in doses of less than 11 mg per day. However, pregnant and lactating women under age 19 should limit doses to less than 9 mg per day. Manganese is Possibly Unsafe when taken by mouth in higher doses. Doses over 11 mg per day are more likely to cause serious side effects. Manganese is Likely Unsafe when inhaled by women who are pregnant or breast-feeding.

However, some people have a higher risk of experiencing a toxic reaction to manganese, including: