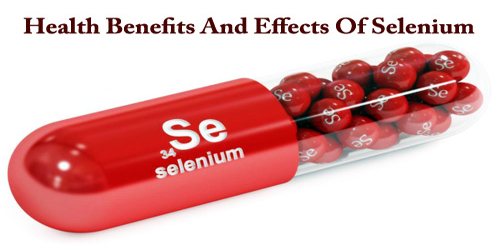 Health Benefits And Effects Of Selenium

Selenium is a trace mineral, which means that our body only needs a small amount of it. Selenium combines with proteins in the body to form antioxidants called selenoproteins, which help protect the cells in our body from free radical damage. Selenium is also essential for normal thyroid function, reproduction, and DNA synthesis. Selenium is not produced in the body, but it is needed for proper thyroid and immune system function.

The amount of selenium people need is:

If we eat meat, fish or nuts, we should be able to get all the selenium we need from our daily diet.

Selenium is actually used for selenium deficiency, a disease that causes underactive thyroid (autoimmune thyroiditis), and high blood pressure during pregnancy. It is also used for diseases of the heart and blood vessels, including stroke, complications from statin drugs, and abnormal cholesterol levels, as well as for many other conditions, but there is no good scientific evidence to support these uses.

Studies have suggested that selenium may also help to:

There has been some investigation into whether a woman’s selenium levels during pregnancy might predict her child’s risk of asthma.

While selenium is clearly an element for many aspects of human health, there is too little evidence to indicate that supplements could be of use in preventing these conditions.

Selenosis (having too much selenium in our body) results in gastrointestinal symptoms, hair loss, white blotchy nails, garlic breath odor, fatigue, irritability, and mild nerve damage. The National Academy of Sciences set a tolerable upper dietary intake level for selenium at 400 micrograms per day for adults. It can cause muscle tenderness, tremor, lightheadedness, facial flushing, blood clotting problems, liver and kidney problems, and other side effects.

Long term use of high selenium doses can lead to dangerous side effects including:

Selenium might increase the risk of bleeding during and after surgery. Stop taking selenium at least 2 weeks before a scheduled surgery.

High doses or long-term use of selenium can lead to serious medical problems or death. Do not use more of this product than is recommended on the label. Follow all directions on medicine labels and packages. Taking 0.35mg or less a day of selenium supplements is unlikely to cause any harm.