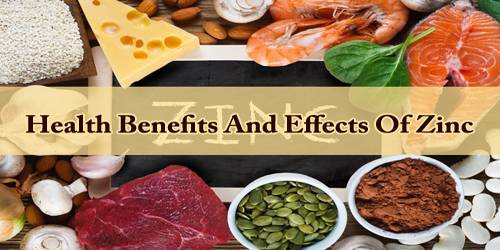 Health Benefits And Effects Of Zinc

Zinc is a mineral, and it is called an “essential trace element” because very small amounts of zinc are necessary for human health. Since the human body does not store excess zinc, it must be consumed regularly as part of the diet. Common dietary sources of zinc include red meat, poultry, and fish. Zinc deficiency can cause short stature, reduced ability to taste the food, and the inability of testes and ovaries to function properly.

Zinc is responsible for a number of functions in the human body, and it helps stimulate the activity of at least 100 different enzymes. Only a small intake of zinc is necessary to reap the benefits. The element is naturally found in many different foods, but it is also available as a dietary supplement.

Good sources of zinc include:

Here are some key points about zinc:

Zinc is used for the treatment and prevention of zinc deficiency and its consequences, including stunted growth and acute diarrhea in children, slow wound healing, and Wilson’s disease. Zinc is also used for many other conditions. There is some scientific evidence to support its use for some of these conditions. But for most, there is no good scientific evidence to support its use.

The following are some of the health benefits of zinc:

Zinc and regulating immune function – According to the European Journal of Immunology, the human body needs zinc to activate T lymphocytes (T cells).

According to a study published in the American Journal of Clinical Nutrition, “zinc-deficient persons experience increased susceptibility to a variety of pathogens.”

Zinc for treating diarrhea – According to the World Health Organization, diarrhea kills an astonishing 1.6 million children under 5 every year. Zinc pills may help reduce diarrhea.

A PLoS Medicine study, which “followed a nationwide public health campaign to increase zinc use for childhood diarrhea in Bangladesh,” confirmed that a 10-day course of zinc tablets is effective at treating diarrhea and also helps prevent future bouts of the condition.

Zinc effects on learning and memory – Research conducted at the University of Toronto and published in the journal Neuron suggested that zinc has a crucial role in regulating how neurons communicate with one another, affecting how memories are formed and how we learn.

Zinc to treat the common cold – Zinc lozenges were found to shorten the duration of common cold episodes by up to 40 percent in a study published in the Open Respiratory Medicine Journal.

In addition, a Cochrane review concluded that taking “zinc (lozenges or syrup) is beneficial in reducing the duration and severity of the common cold in healthy people when taken within 24 hours of the onset of symptoms.”

A Swedish study that analyzed zinc in wound healing concluded, “topical zinc may stimulate leg ulcer healing by enhancing re-epithelialization, decreasing inflammation and bacterial growth. When zinc is applied on wounds, it not only corrects a local zinc deficit but also acts pharmacologically.”

However, research has not consistently shown that the use of zinc sulfate in patients with chronic wounds or ulcers is effective at improving the healing rate.

Zinc and decreased risk of age-related chronic disease – A study from researchers at Oregon State University have found that improving zinc status through diet and supplementation may reduce the risk of inflammatory diseases. It has been known for decades that zinc has a significant role in immune function. Deficiency has been linked to increased inflammation in chronic disease and triggering new inflammatory processes.

Zinc for preventing age-related macular degeneration (AMD) – Zinc prevents cellular damage in the retina, which helps in delaying the progression of AMD and vision loss, according to a study published in the Archives of Ophthalmology.

Zinc and fertility – Several studies and trials have linked poor zinc status with low sperm quality. For example, one study in the Netherlands found that subjects had a higher sperm count after zinc sulfate and folic acid supplementation. In another study, researchers concluded that poor zinc intake may be a risk factor for the low quality of sperm and male infertility.

Zinc may also be effective for the treatment of:

The amount of zinc we need is about:

People should be able to get all the zinc they need from their daily diet.

Taking high doses of zinc reduces the amount of copper the body can absorb. This can lead to anemia and weakening of the bones. Although severe zinc deficiency is rare, it can occur in people with rare genetic mutations, breastfeeding infants whose mothers don’t have enough zinc, people with alcohol addictions, and anyone taking certain immune-suppressing medications.

Zinc is possibly safe when taking by mouth in doses greater than 40 mg daily. There is some concern that taking doses higher than 40 mg daily might decrease how much copper the body absorbs. Decreased copper absorption may cause anemia. Taking high amounts of zinc is likely unsafe. High doses above the recommended amounts might cause fever, coughing, stomach pain, fatigue, and many other problems. Taking more than 100 mg of supplemental zinc daily or taking supplemental zinc for 10 or more years doubles the risk of developing prostate cancer. There is also concern that taking large amounts of a multivitamin plus a separate zinc supplement increases the chance of dying from prostate cancer. Taking 450 mg or more of zinc daily can cause problems with blood iron. Single doses of 10-30 grams of zinc can be fatal.

It is estimated that around 2 billion people worldwide are deficient in zinc due to inadequate dietary intake. Since zinc deficiency impairs your immune system increasing the chances of infection zinc deficiency is thought to cause over 450,000 deaths in children under 5 every year.

Normally, zinc deficiency is due to insufficient dietary intake. However, it may also be due to malabsorption and chronic illnesses such as diabetes, malignancy (cancer), liver disease, and sickle cell disease.

Zinc deficiency during pregnancy may increase the chances of a difficult or prolonged birth.

Zinc deficiency is difficult to detect using laboratory tests due to our body’s tight control over zinc levels. Thus, people may still be deficient even if tests indicate normal levels. Doctors consider other risk factors such as poor dietary intake and genetics alongside blood results when determining whether any people need supplements.