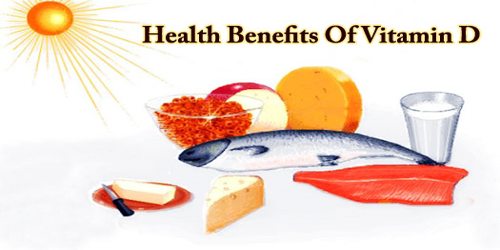 Vitamins are nutrients that the body cannot create, and so a person must consume them in the diet. A human body produces vitamin D as a response to sun exposure. A person can also boost their vitamin D intake through certain foods or supplements.

Vitamin D is essential for several reasons, including maintaining healthy bones and teeth. It may also protect against a range of diseases and conditions, such as type 1 diabetes. Despite its name, vitamin D is not a vitamin, but a prohormone, or precursor of a hormone.

As the research into vitamin D is accumulating, it’s hard to know where the accolades should start. “Activated vitamin D is one of the most potent inhibitors of cancer cell growth,” says Michael F. Holick, Ph.D., MD, who heads the Vitamin D, Skin, and Bone Research Laboratory at Boston University School of Medicine. “It also stimulates our pancreas to make insulin. It regulates our immune system.”

From about late March/early April to the end of September, most people should be able to get all the vitamin D they need from sunlight.

The body creates vitamin D from direct sunlight on the skin when outdoors. But between October and early March, we do not get enough vitamin D from sunlight. Read more about vitamin D and sunlight. Vitamin D is also found in a small number of foods.

Another source of vitamin D is dietary supplements.

Vitamin D has multiple roles in the body. It assists in:

The recommended daily allowance of vitamin D is 600 international units (IU) for most people ages 1 to 70, according to the Food and Nutrition Board (FNB) at the Institute of Medicine of the National Academies. For people over the age of 70, it’s 800 IU, and for infants, it’s 400 IU. 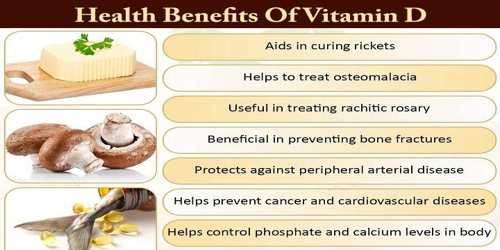 Healthy Bones: Vitamin D plays a significant role in the regulation of calcium and maintenance of phosphorus levels in the blood. These factors are vital for maintaining healthy bones.

People need vitamin D to allow the intestines to stimulate and absorb calcium and reclaim calcium that the kidneys would otherwise excrete.

Vitamin D deficiency in children can cause rickets, which leads to a severely bowlegged appearance due to the softening of the bones.

Similarly, in adults, vitamin D deficiency manifests as osteomalacia or softening of the bones. Osteomalacia results in poor bone density and muscular weakness.

A vitamin D deficiency can also present as osteoporosis, for which over 53 million people in the United States either seek treatment or face an increased risk.

Reduced Risk of Flu: A 2018 review of existing research suggested that some studies had found that vitamin D had a protective effect against the influenza virus.

However, the authors also looked at other studies where vitamin D did not have this effect on flu and flu risk.

Further research is, therefore, necessary to confirm the protective effect of vitamin D on the flu.

Healthy Infants: Vitamin D deficiency has links to high blood pressure in children. One 2018 study found a possible connection between low vitamin D levels and stiffness in the arterial walls of children.

The American Academy of Allergy Asthma and Immunology (AAAAI) suggests that evidence points to a connection between low vitamin D exposure and an increased risk of allergic sensitization.

An example of this is children who live closer to the equator and have lower rates of admission to hospital for allergies plus fewer prescriptions of epinephrine autoinjectors. They are also less likely to have a peanut allergy.

Furthermore, vitamin D may enhance the anti-inflammatory effects of glucocorticoids. This benefit makes it potentially useful as supportive therapy for people with steroid-resistant asthma.

Healthy Pregnancy: A 2019 review suggests that pregnant women who are deficient in vitamin D may have a greater risk of developing preeclampsia and giving birth preterm.

It is also important to note that in a 2013 study, researchers associated high vitamin D levels during pregnancy with an increased risk of food allergy in the child during the first 2 years of life.

The Endocrine Society recommends that adults take 1,500–2,000 IU per day in supplements to avoid vitamin D deficiency and 1,000 IU per day for infants and children. (3) Yet recommendations vary widely. Keep in mind that there can be too much of a good thing with vitamin D, which is why the FNB set an upper limit of 4,000 IU per day in supplementation for people over age 9 and 1,000–3,000 IU for infants and children up to age 8, depending on age. Dosages beyond those increase the risk for death, cancer, and cardiovascular events, as well as falls and fractures in seniors.