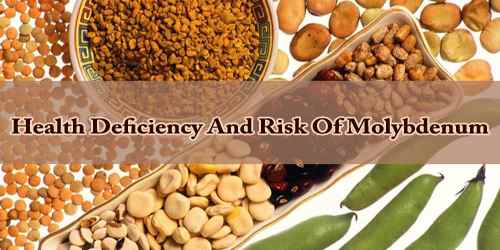 Health Deficiency And Risk Of Molybdenum

Molybdenum is an essential mineral. It is found in foods such as milk, cheese, cereal grains, legumes, nuts, leafy vegetables, and organ meats. It is vital for the function of several enzymes but is easily obtained through the diet. Molybdenum deficiencies are virtually unheard of, and there are no benefits to high doses, making supplementation unnecessary. The human body requires very low quantities of molybdenum to support three groups of enzymes.

Molybdenum works in the body to break down proteins and other substances. Molybdenum deficiency is very uncommon. It has an important role in normal body functions, but there is not enough information to know how it might work for any medical condition.

Molybdenum deficiencies are extremely rare, since molybdenum is easily available through the diet, as it is found in grains and water. The body easily retains molybdenum, and only needs a few micrograms.

Molybdenum functions as a cofactor for three groups of enzymes, meaning it is needed for the enzymes to do their job. It is incorporated into a molecule called molybdopterin, which forms the actual cofactor. A molybdenum deficiency would impair the functions of these enzymes, which would prevent the body from processing amino acids that contain sulfur. Molybdenum deficiencies are characterized by symptoms similar to sulfur toxicity.

Molybdenum is most commonly used for molybdenum deficiency. It is also used for cancer of the esophagus, other types of cancer, Wilson disease, and other conditions, but there is no good scientific evidence to support these uses. Molybdenum supplementation is unnecessary. Due to the lack of evidence and very low risk of deficiency, molybdenum may not even need to be added to multivitamin formulas.

Molybdenum is found in a wide variety of foods. Foods that grow above ground tend to be higher in molybdenum than foods that grow below the ground, such as potatoes or carrots.

Foods that have had their molybdenum content estimated include:

As a general statement most meats, vegetables, and fruits tend to have low levels of molybdenum (0.50µg/100g or less). Drinking water can also be considered a source of molybdenum. Ground and well water can have varying concentrations depending on the soil that the water runs through, and it seems that the intake of molybdenum from drinking water (US study) generally does not exceed 20µg each day. This provides about half of the molybdenum’s recommended daily allowance.

Molybdenum deficiency, however, has been noted in hospital setting in a patient on total parental nutrition (TPN) devoid of molybdenum over the course of six months; major symptoms appeared to be a high L-methionine level in serum with low L-cystiene and taurine, with a general impairment of sulfur elimination. The patient was normalized when molybdenum (as ammonium molybdate) was added to TPN.

Molybdenum is considered to be an essential trace element in both animals and humans. Safe and adequate intake levels have been suggested for various segments of the population, namely 0.015–0.04 mg/day for infants, 0.025–0.15 mg/day for children aged 1–10 and 0.075–0.25 mg/day for all individuals above the age of 10.

Very high levels of molybdenum in the diet such as 10 to 15 mg/day, and industrial exposure to molybdenum, might cause gout. Molybdenum supplements might make gout worse. Avoid taking molybdenum in doses above 2 mg per day for adults.

There’s some evidence to suggest taking molybdenum supplements might cause joint pain. People should be able to get all the molybdenum they need by eating a varied and balanced diet. The molybdenum we get from food isn’t likely to be harmful.