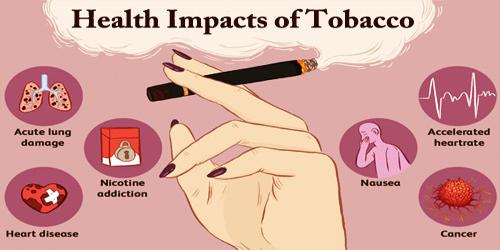 Tobacco is the biggest enemy of public health today. The effects of tobacco use, as we all know, are destructive and widespread. Tobacco use is now a well-documented threat to global health. It kills more than 7 million people a year and is currently the world’s single biggest cause of preventable death. Much of what is known about the risks of tobacco, however, concerns the direct impact (in terms of morbidity and mortality) of first-hand and second-hand smoke on people’s health.

One of the major concerns about tobacco use is that it not only affects the individuals who smoke but also individuals who are around those who smoke. The effects of second-hand smoke can even be more significant than for the actual smoker. Lungs are affected from the harmful gases emitted from tobacco products. A good number of the individuals who smoke tobacco do not have an idea of what they are smoking because apart from the nicotine, there are many other toxic compounds that are included in the smoke that they are inhaling. Once these compounds get into the lungs, they are absorbed into the bloodstream which then transports them to body organs such as the heart, spleen, liver, and the central nervous system.

The human health impacts of tobacco use are well-documented. The World Health Organization (WHO) estimates that there will be more than 8 million tobacco-related deaths a year by 2030, amounting to 10% of annual deaths worldwide. Tobacco smoke contains more than 70 chemicals that cause cancer. Tobacco also contains nicotine, which is a highly addictive psychoactive drug. When tobacco is smoked, nicotine causes physical and psychological dependency. Cigarettes sold in underdeveloped countries tend to have higher tar content, and are less likely to be filtered, potentially increasing vulnerability to tobacco smoking-related disease in these regions.

The chemicals in tobacco smoke can damage our bodies in many ways. For example:

Smoking damages the airways and small air sacs in our lungs. This damage starts early in smokers, and lung function continues to worsen as long as the person smokes. Still, it may take years for the problem to become noticeable enough for lung disease to be diagnosed. Smoking makes pneumonia and asthma worse. It also causes many other lung diseases that can be nearly as bad as lung cancer.

If any people smoke, they:

It can be a long time before smokers get a smoking-related condition or disease. Because of this, some people believe it won’t happen to them.

In fact, up to ⅔ of long term smokers will:

There is also growing evidence to suggest that smoking has a negative impact on mental health. For example, some studies show that smoking is associated with increased rates of anxiety, panic attacks, depression, suicide attempts, and schizophrenia.

Tobacco smokers are 30-40% more likely to develop type 2 diabetes than non-smokers, and the risk increases with the number of cigarettes smoked. Furthermore, diabetic smokers have worse outcomes than diabetic non-smokers. In addition to the numerous documented negative health effects of smoking, several types of “smoker’s paradoxes” (cases where smoking appears to have specific beneficial effects) have been observed. Smoking may prevent ‘Parkinson’s disease’.