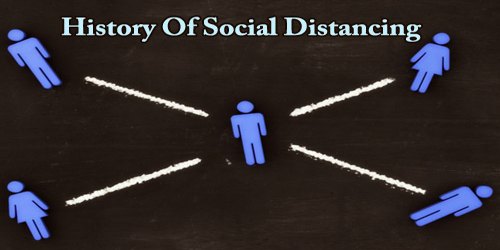 The Centers for Disease Control and Prevention (CDC) have described social distancing as a set of “methods for reducing frequency and closeness of contact between people in order to decrease the risk of transmission of disease”. During the 2019–2020 coronavirus pandemic, the CDC revised the definition of social distancing as “remaining out of congregrate settings, avoiding mass gatherings, and maintaining distance (approximately six feet or two meters) from others when possible”.

Previously, in 2009 during the 2009 flu pandemic the WHO described social distancing as “keeping at least an arm’s length distance from others, and minimizing gatherings”. It is combined with good respiratory hygiene and hand washing, and is considered the most feasible way to reduce or delay a pandemic.

During the 1916 New York City polio epidemic, when there were more than 27000 cases and more than 6000 deaths due to polio in the United States, with more than 2000 deaths in New York City alone, movie theatres were closed, meetings were cancelled, public gatherings were almost non-existent, and children were warned not to drink from water fountains, and told to avoid amusement parks, swimming pools and beaches.

The 1918 Flu was the most deadly pandemic in human history. It is also one of the largest examples of NPI implementation on record. From September 1, 1918 – April 5, 1919, the world mourned the loss of more than 50 million lives as a result of the flu. Approximately 500,000 of those flu-related deaths occurred in the United States.

Philadelphia detected its first case of a deadly, fast-spreading strain of influenza on September 17, 1918. The next day, in an attempt to halt the virus’ spread, city officials launched a campaign against coughing, spitting, and sneezing in public. Yet 10 days later and despite the prospect of an epidemic at its doorstep the city hosted a parade that 200,000 people attended.

Shortly after health measures were put in place in Philadelphia, a case popped up in St. Louis. Two days later, the city shut down most public gatherings and quarantined victims in their homes. The cases slowed. By the end of the pandemic, between 50 and 100 million people were dead worldwide, including more than 500,000 Americans but the death rate in St. Louis was less than half of the rate in Philadelphia.

The final death rate in St. Louis increased following a second wave of cases, but remained overall less than in other cities. Bootsma and Ferguson analyzed social distancing interventions in sixteen U.S. cities during the 1918 epidemic and found that time-limited interventions reduced total mortality only moderately (perhaps 10–30%), and that the impact was often very limited because the interventions were introduced too late and lifted too early. It was observed that several cities experienced a second epidemic peak after social distancing controls were lifted, because susceptible individuals who had been protected were now exposed.

Public health interventions were the first line of defense against the epidemic in the absence of a vaccine. These measures include closing schools, shops, and restaurants; placing restrictions on transportation; mandating social distancing, and banning public gatherings. Of course, getting citizens to comply with such orders was another story: In 1918, a San Francisco health officer shot three people when one refused to wear a mandatory face mask. In Arizona, police handed out $10 fines for those caught without the protective gear. But eventually, the most drastic and sweeping measures paid off.

Data from a collaborative study between the University of Michigan Medical School and the CDC show that U.S. cities that applied early, sustained and layered NPI, including quarantine, self-isolation, school closures and social distancing, experienced the greatest reductions in weekly death rates from September 8, 1918 – February 22, 1919. Furthermore, many cities that deactivated NPI measures early experienced 2 peaks in mortality. However, none of these cities experienced their second mortality peak while the first set of NPIs was still active. This data highlights the transient protective nature of NPI and further suggests a causal relationship between NPI and decreased disease mortality.

School closures were shown to reduce morbidity from the Asian flu by 90% during the 1957–1958 outbreak, and up to 50% in controlling influenza in the U.S., 2004–2008. Similarly, mandatory school closures and other social distancing measures were associated with a 29% to 37% reduction in influenza transmission rates during the 2009 flu epidemic in Mexico.

After implementing a multitude of strict closures and controls on public gatherings, St. Louis, San Francisco, Milwaukee, and Kansas City responded fastest and most effectively: Interventions there were credited with cutting transmission rates by 30 to 50 percent. New York City, which reacted earliest to the crisis with mandatory quarantines and staggered business hours, experienced the lowest death rate on the Eastern seaboard. In 1918, the studies found, the key to flattening the curve was social distancing.

During the SARS outbreak of 2003, social distancing measures such as banning large gatherings, closing schools and theaters, and other public places, supplemented public health measures such as finding and isolating affected people, quarantining their close contacts, and infection control procedures. This was combined with wearing masks for certain people. During this time in Canada, “community quarantine” was used to reduce transmission of the disease with moderate success.

In 2007, two studies published in the Proceedings of the National Academy of Sciences sought to understand how responses influenced the disease’s spread in different cities. By comparing fatality rates, timing, and public health interventions, they found death rates were around 50 percent lower in cities that implemented preventative measures early on, versus those that did so late or not at all. The most effective efforts had simultaneously closed schools, churches, and theaters, and banned public gatherings. This allowed time for vaccine development and lessened the strain on health care systems.

The studies reached another important conclusion: That relaxing intervention measures too early could cause an otherwise stabilized city to relapse. St. Louis, for example, was so emboldened by its low death rate that the city lifted restrictions on public gatherings less than two months after the outbreak began. A rash of new cases soon followed. Of the cities that kept interventions in place, none experienced a second wave of high death rates.

In other words, social distancing and self-isolating measures must be activated as close to the time of disease onset as possible and sustained throughout the peak of disease trajectory in local communities in order to be most effective. If executed properly, non-pharmaceutical interventions can help slow the spread and decrease the number of disease-related deaths during pandemics.

During the 2019–2020 coronavirus (COVID-19) pandemic, the World Health Organization (WHO) suggested the reference to “physical” as an alternative to “social”, in keeping with the notion that it is a physical distance which prevents transmission; people can remain socially connected via technology. To slow down the spread of infectious diseases and avoid overburdening healthcare systems, particularly during a pandemic, several social distancing measures are used, including the closing of schools and workplaces, isolation, quarantine, restricting movement of people and the cancellation of mass gatherings. Social distancing isn’t a new idea it saved thousands of American lives during the 1918 pandemic. It will work for the COVID-19 pandemic if enforced.