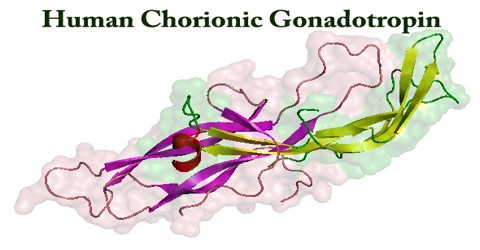 Human Chorionic Gonadotropin (HCG) is a glycoprotein hormone, which similar in structure to luteinizing hormone that is secreted by the placenta during early pregnancy to maintain corpus luteum function and stimulate placental progesterone production, is found in the urine and blood serum of pregnant women, is commonly tested for as an indicator of pregnancy, is used medically to induce ovulation and to treat male hypogonadism and cryptorchidism, and is produced in certain cancers. Typically, the HCG levels will double every 72 hours. The level will reach its peak in the first 8-11 weeks of pregnancy and then will decline and level off for the remainder of the pregnancy. Human Chorionic Gonadotropin (HCG) is a member of a family of glycoprotein hormones that are disulfide-rich heterodimers, with a common α- chain and distinctive β-chains specific to their particular G- protein linked receptors. It is a glycoprotein composed of 237 amino acids with a molecular mass of 25.7 kDa. It is heterodimeric, with an α (alpha) subunit identical to that of luteinizing hormone (LH), follicle-stimulating hormone (FSH), thyroid-stimulating hormone (TSH), and β (beta) subunit that is unique to hCG.

Structural and sequence comparisons indicate an evolutionary homology, albeit remote, between the glycoprotein hormone chains and other cystine-knot proteins, notably platelet-derived growth factor. Segments of the α- and β-chains that have been convincingly implicated in receptor binding by HCG are juxtaposed on one side of the molecule. A glycosylation site implicated in signal transduction but not in binding is also close to the presumed binding site suggesting a possible coupling between ligand binding and signaling. As we know today, HCG only promotes progesterone production for 3-4 weeks following pregnancy implantation. This function is active for approximately 10% of the length of pregnancy. It interacts with the LHCG receptor of the ovary and promotes the maintenance of the corpus luteum during the beginning of pregnancy. This allows the corpus luteum to secrete the hormone progesterone during the first trimester. Progesterone enriches the uterus with a thick lining of blood vessels and capillaries so that it can sustain the growing fetus.

HCG may repel the immune cells of the mother, protecting the fetus during the first trimester. It has also been hypothesized that HCG may be a placental link for the development of local maternal immunotoleranc. Some HCG tests measure the exact amount in blood or urine. Some just check to see if the hormone is present. HCG is made by the placenta during pregnancy. The test can be used to see if a woman is pregnant. Or it can be done as part of a screening test for birth defects. HCG may also be made by certain tumors, especially those that come from an egg or sperm. HCG levels are often tested in a woman who may have tissue that is not normal growing in her uterus. The test also may be done to look for molar pregnancy or a cancer inside the uterus. Several HCG tests may be done after a miscarriage to be sure a molar pregnancy is not present. In a man, HCG levels may be measured to help see if he has cancer of the testicles.