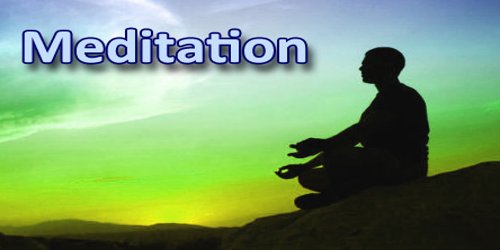 Meditation means to drop everything which is in one’s memory and to come to state where only consciousness remains, where only awareness remains. It is a method for acquainting our mind with virtue. The more familiar our mind is with virtue, the calmer and more peaceful it becomes. When our mind is peaceful we are free from worries and mental discomfort, and we experience true happiness. The word meditation carries different meanings in different contexts. The term meditation refers to a broad variety of practices that includes techniques designed to promote relaxation, build internal energy or life force (qi, ki, prana, etc.) and develop compassion, love, patience, generosity, and forgiveness. A particularly ambitious form of meditation aims at effortlessly sustained single-pointed concentration meant to enable its practitioner to enjoy an indestructible sense of well-being while engaging in any life activity.

Meditation is often used to clear the mind and ease many health concerns, such as high blood pressure, depression, and anxiety. It may be done sitting, or in an active way for instance, Buddhist monks involve awareness in their day-to-day activities as a form of mind-training. Prayer beads or other ritual objects are commonly used during meditation in order to keep track of or remind the practitioner about some aspect of that training.

There are six powerful types of meditation. There is scientific proof linking meditation to improved sleep, reduced anxiety, lower blood pressure, decreased pain and a myriad of other health benefits, and in addition all the benefits of increased self awareness. People who practice a daily meditation technique can attest to the holistic benefits that have resulted in their lives.