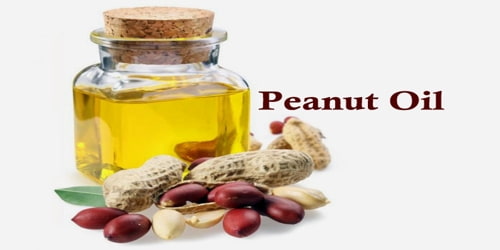 Introduction: Peanut oil, also referred to as groundnut oil or arachis oil, is a vegetable-derived oil made from the edible seeds of the peanut plant. It is mild flavored oil that is excellent for frying and is often used in Asian cuisines. Peanut oil is offered in several varieties and can be purchased at most major groceries stores. The oil is available with a strong peanut flavor and aroma, analogous to sesame oil.

Peanut oil is also one of the world’s traditional deep-frying oils because it can reach such a high temperature which keeps the outside of the food crispy and the inside very moist. Peanut oil works well with all types of cooking and has been the oil of choice for frying by numerous restaurants for many years because it tastes great.

Though the peanut plant flowers above ground, the seeds or peanuts actually develop underground. This is why peanuts are also known as groundnuts. Peanuts are often grouped with tree nuts like walnuts and almonds, but they are actually a type of legume that belongs to the pea and bean family.

Depending on processing, peanut oil can have a wide range of flavors that vary from mild and sweet to strong and nutty.

Antioxidants such as vitamin E are sometimes added to improve the shelf life of the oil.

There are several different types of peanut oil. Each one is made using different techniques:

Peanut oil is widely used around the world but is most common in Chinese, South Asian, and Southeast Asian cooking. It became more popular in the United States during World War II when other oils were scarce due to food shortages.

Health Benefits of Peanut Oil: Peanut oil is one of the healthiest oils. It is a vegetable oil that is naturally trans fat-free, cholesterol free, and low in saturated fats. Peanut oil is high in unsaturated fats, especially monounsaturated fat, like olive oil. It is also a source of the antioxidant, vitamin E and phytosterols, which benefit heart health. Peanut oil is also a perfect choice for healthier frying because it can be heated to a higher temperature than other oils, and this results in lower oil pick up in the food. Just one tablespoon of peanut oil contains 11% of the recommended daily intake of vitamin E.

Vitamin E is actually the name for a group of fat-soluble compounds that have many important functions in the body. The main role of vitamin E is to function as an antioxidant, protecting the body from harmful substances called free radicals.

Here is the nutritional breakdown for one tablespoon of peanut oil :

Peanut oil is also unique because it does not absorb flavors from the foods that are fried in it, meaning that multiple food types can be fried in the same batch of oil without cross-contamination of flavors. For this reason, peanut oil has become a favorite in large-scale food operations where multiple food types are often cooked in a fryer before the oil is replaced.

At the 1900 Paris Exhibition, the Otto Company, at the request of the French Government, demonstrated that peanut oil could be used as a source of fuel for the diesel engine; this was one of the earliest demonstrations of biodiesel technology.

Some medicines and vitamins use arachis oil as a suspension agent.