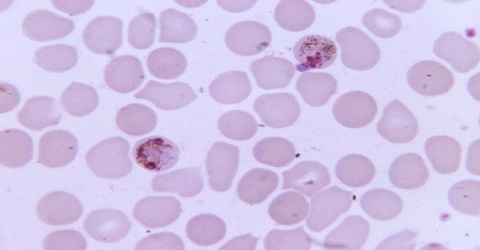 Plasmodium malariae is a parasitic protozoa that causes malaria in humans. It is one of several species of Plasmodium parasites that infect humans including Plasmodium falciparum and Plasmodium vivax which are responsible for most malarial infection. While found worldwide, it is a so-called “benign malaria” and is not nearly as dangerous as that produced by P. falciparum or P. vivax. It causes fevers that recur at approximately three-day intervals (a quartan fever), longer than the two-day (tertian) intervals of the other malarial parasites, hence its alternate names quartan fever and quartan malaria.

After the discovery by Alphonse Laveran in 1880 (75) that the causative agent for malaria was a parasite, detailed studies on these organisms commenced. The early detailed work of Golgi in 1886 demonstrated that in some patients there was a relationship between the 72-hour life cycle of development of the parasites and a similar periodicity of the paroxysm (chill and fever pattern in the patient), whereas in other patients there were 48-hour cycles of development.

Plasmodium malariae is the one of the least studied of the six species that infect humans, in part because of its low prevalence and milder clinical manifestations compared to the other species. It is widespread throughout sub-Saharan Africa, much of southeast Asia, Indonesia, on many of the islands of the western Pacific and in areas of the Amazon Basin of South America. In endemic regions, prevalence ranges from less than 4% to more than 20%, but there is evidence that P. malariae infections are vastly underreported. Plasmodium malariae is one of the four species of the genus Plasmodium that uses humans as a primary host. The other three species are P. falciparum, P. vivax,and P. vivale. The primary mode of transmission from host to host by these four species uses a female Anopheles mosquito as a vector. (DPDx) While the symptoms resulting from the different species are different, the life cycle only has minor differences. The life cycle is initiated when the mosquito vector injects sporozites into the human hosts during a blood-meal. The sporozites then migrate to the liver, where they reproduce asexually and produce merozites. These merozites then enter the bloodstream and infect erythrocytes, becoming trophozoites. The period of time that the trophozoites are enlarging is called the trophic period, and this ends when several divisions occur, but none of these cycles go through the cytokinesis stage, forming what is called a schizont. The erythrocyte then lyses, introducing new merozites into the blood cycle and starting the cycle over again, until an uninfected Anopheles mosquito takes a blood-meal from the infected host, and transmits the infection to another host.

The main physical manifestations of malaria in a human host are febrile attacks that are known as malarial paroxysms. These symptoms appear during the blood stage of the life cycle; no symptoms will appear during other stages. The severity of the infection depends on the infecting species of Plasmodium and the health of the host prior to infection. Plasmodium malariae can infect several species of mosquito and can cause malaria in humans. P. malariae can be maintained at very low infection rates among a sparse and mobile population because unlike the other Plasmodium parasites, it can remain in a human host for an extended period of time and still remain infectious to mosquitoes.

Along with bouts of fever and more general clinical symptoms such as chills and nausea, the presence of edema and the nephrotic syndrome has been documented with some P. malariae infections. It has been suggested that immune complexes may cause structural glomerular damage and that renal disease may also occur. Although P. malariae alone has a low morbidity rate, it does contribute to the total morbidity caused by all Plasmodium species, as manifested in the incidences of anemia, low birth rate and reduced resistance to other infections.

Due to a similarity in the appearances of the pathogens, P. knowlesi infections are often misdiagnosed as P. malariae infections. Molecular analysis is usually required for an accurate diagnosis.

Treatment or Diagnosis of Plasmodium malariae Diagnosis of Plasmodium malariae infection is preferentially made by the examination of peripheral blood films stained with Giemsa stain. PCR techniques are now routinely used in many laboratories to confirm diagnoses and to separate mixed infections. Recently, in southeast Asia it has been shown that infections with the monkey malaria parasite Plasmodium knowlesi in humans have been misdiagnosed as being infections with P. malariae. In areas of South America where humans and monkeys coexist, it is impossible to differentiate infections of P. malariae from infections of P. brasilianum because they may, in fact, be one and the same.

The food vacuole is the specialized compartment that degrades hemoglobin during the asexual erythrocytic stage of the parasite. It is implied that effective drug treatments can be developed by targeting the proteolytic enzymes of the food vacuole.

The continuing work with the plasmepsin associated with P. malariae, plasmepsin 4, by Professor Ben Dunn and his research team from the University of Florida may provide hope for long term malaria control in the near future.