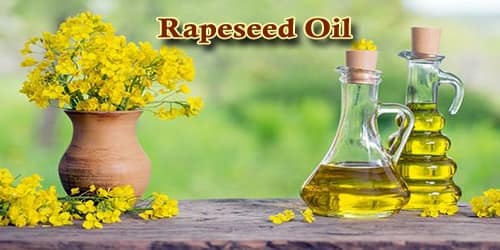 Rapeseed oil is from the third most important crop grown here in the UK after wheat and barley and is the only commonly used culinary oil that can be widely found both grown and bottled in the UK. Other vegetable oils, such as olive or sunflower, are primarily imported from mainland Europe or further afield. Rapeseed oil is also produced in other countries, such as Ireland, France, Germany, the Netherlands, and Canada.

Brassica napus grow to 100 cm (39 in) high with lower leaves pinnatifid and glaucous and the upper leaves clasping the stem. The flowers are yellow and about 17 mm (0.67 in) across. B. napus differ from B. nigra but can be distinguished by the upper leaves which do not clasp the stem, from B. rapa by its smaller petals which are less than 13 mm (0.51 in) across.

The many names for rapeseed oil:

Uses and Health Benefits of Rapeseed oil: Rapeseed has been cultivated and used by humans for thousands of years in India and since the Middle Ages in Europe, for lamp oil, to make soap and later to lubricate engines.

Rapeseed today is used to make biodiesel, margarine, animal feed, and bioplastics. Rapeseed oil is the preferred oil stock for biodiesel production in most of Europe, accounting for about 80 percent of the feedstock, partly because rapeseed produces more oil per unit of land area compared to other oil sources, such as soybeans, but primarily because canola oil has a significantly lower gel point (lower temperature for freezing) than most other vegetable oils. The Food and Agriculture Organization reports 36 million tons of rapeseed were produced in the 2003–2004 season and estimated 58.4 million tons in the 2010–2011 seasons. In Europe, rapeseed is primarily cultivated for animal feed, due to its very high lipid and medium protein content.

Rapeseed oil is always compared side by side to olive oil, and while both may have health benefits on their own, rapeseed oil is better for cooking due to its higher smoking point. It is loaded with Vitamin E which is good for the eyes, skin, hair, as well as the immune system.

Rapeseed oil also has rich quantities of polyunsaturated fat, a fat that has been observed to lower levels of LDL cholesterol (bad cholesterol). It happens to be gluten-free, vegetarian, Halal and Kosher, making it a versatile cooking oil and healthy monounsaturated fat option.