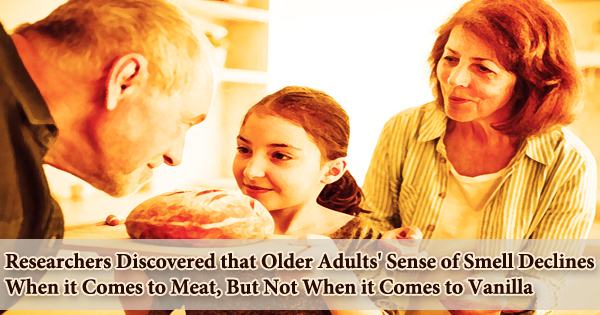 Finding food, distinguishing it from dangerous substances, and appreciating its flavor all rely on the sense of smell. Airborne molecules stimulate the sense of smell (technical name: olfaction); they enter the body through the nose and mouth, attaching to receptor cells that line the mucus membranes far back in the nose. There are millions of these cells in humans, but only a few hundred different types of olfactory receptors (400 is a reasonable estimate).

Contrary to popular belief, elderly persons with a deteriorating sense of smell do not have a completely diminished olfactory aptitude for scents in general; it all depends on the type of odor. After studying a wide sample of elderly Danes and their intensity perception of common food odors, researchers at the University of Copenhagen came to this result. Many people may relate to grandpa and grandmother not being as adept at smelling as they once were. Furthermore, it has been scientifically proven.

Eva Honnens de Lichtenberg Broge and her colleagues from the Department of Food Science investigated the capacity of elderly Danes to detect common food scents. The researchers looked at how strongly older individuals were affected by various meal odors, as well as how much they enjoyed them.

“Our study shows that the declining sense of smell among older adults is more complex than once believed. While they can’t smell fried meat, onions, or mushrooms as strongly as younger adults, they can smell orange, raspberry, and vanilla just as well. As a result, a decline in older people’s sense of smell appears to be odor-specific. What’s fascinating is that how much you enjoy an odor isn’t always determined by your impression of its strength,” explains Eva Honnens de Lichtenberg Broge.

Fried meat, onions, and mushrooms, for example, were found to have no effect on liking, despite the fact that these smells had the greatest decrease in intensity perception. Among other factors, their capacity to smell coffee deteriorated, albeit they didn’t like the fragrance of coffee as much as younger individuals.

They can only conjecture as to why the intensity reduction was most evident in meals like fried meat, onions, and mushrooms, which are considered “savory” or “umami” by nature.

“This might be related to the fact that they are typical food odors with a prominent taste ingredient of salty or umami. It is commonly acknowledged that salty is the fundamental taste that ages the most. Since taste and smell are strongly associated when it comes to food, our perception of aroma may be disturbed if one’s taste perception of saltiness is impaired to begin with,” explains Eva Honnens de Lichtenberg Broge.

Health and quality of life –

The researchers believe that people trying to enhance the meals and eating experiences of older persons would be able to use their results. According to statistics, half of the people hospitalized to Danish hospitals over the age of 65 are malnourished. One out of every five nursing home residents has the same problem.

“Our results show that as long as a food odor is recognizable, its intensity will not determine whether or not you like it. So, if one wants to improve food experiences of older adults, it is more relevant to pay attention to what they enjoy eating than it is to wonder about which aromas seem weaker to them,” concludes Eva Honnens de Lichtenberg Broge.

Smell, in particular, tends to deteriorate with age, making food less attractive, reducing appetite, and leading to poor nutrition in the elderly. Food Quality and Preference is the scholarly publication where the study was published.