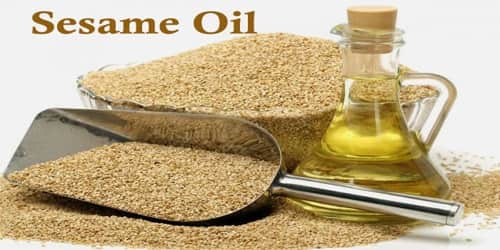 Introduction: Sesame oil or gingelly oil, which comes from sesame seeds, is a lesser-known vegetable oil. It is, in fact, one of the healthiest alternatives to normal vegetable oils. Sesame seeds are small yellowish brown seeds that are primarily found in Africa, but they also grow in smaller numbers on the Indian subcontinent. Besides being used as cooking oil in South India, it is used as a flavor enhancer in Middle Eastern, African, and Southeast Asian cuisines. It has a distinctive nutty aroma and taste.

The oil extracted from Sesame seed is popular in alternative medicine, from traditional massages and treatments to the modern day. This oil is popular in Asia and is also one of the earliest-known crop-based oils, but worldwide mass modern production continues to be limited even today due to the inefficient manual harvesting process required to extract the oil.

Sesame oil has gained quite a bit of popularity in recent years because it is relatively inexpensive to extract (simple hot water flotation or a variety of pressing techniques). However, this oil is best acquired when the seeds are completely ripe, which means that the outer shells burst. The problem is the manual processing that sesame seeds require, because of which there will always be more demand than supply.

Historically, sesame was cultivated more than 5000 years ago as a drought-tolerant crop and was able to grow where other crops failed. Sesame seeds were one of the first crops processed for oil as well as one of the earliest condiments. Sesame was cultivated during the Indus valley civilization and was the main oil crop. It was probably exported to Mesopotamia around 2500 BC.

One tablespoon (13.6 g) of Sesame oil serves 120.2 Calories. The total fat content is 13.6 g, out of which saturated fat content is 1.9 g and monounsaturated fat is 5.4 g. Sesame oil is rich in linoleic acid and oleic acid. The vitamin E content is 0.2 mg (2%) and vitamin K is 1.8μg (2%). There is a predominance of gamma-tocopherol over the other isomers of Vitamin E. the oil do not contain any carbohydrates, proteins, and fibers. The amount of Choline in the oil is 1%. Mentioned below are the best health benefits of Sesame Oil –

Uses of Sesame Oil: Sesame oil is most popular in Asia, especially in Korea, China, and the South Indian states of Karnataka, Andhra Pradesh, and Tamil Nadu, where its widespread use is similar to that of olive oil in the Mediterranean. To use sesame oil as a part of people’s massage routine, follow these instructions:

In industry, sesame oil may be used as –