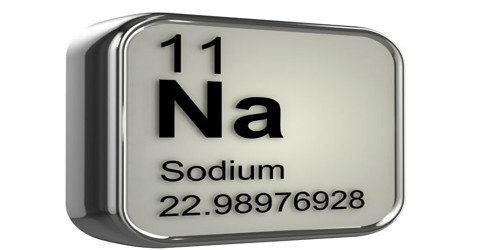 Sodium is a metal, more specificly it is an alkali earth metal. The symbol for sodium is Na, which comes from the Latin name for sodium is natrium, atomic weight: 22.9898; atomic number: 11; and specific gravity: 0.97 at 20°C. It is also a nutrient we need to properly function. It is also a preservative, a flavor enhancer, and even part of many cleaning solutions. Sodium is found in rocks and in the ocean, and it’s what gives many old street lamps their yellow-orange glow. Sodium is an essential mineral for the human body. The most common form of sodium is table salt (sodium chloride). As an added ingredient to most foods – used for curing meat, masking off-flavors, retaining moisture, and enhancing flavors – sodium is typically over-consumed in very high amounts in modern society. Most of the sodium Americans consume comes from processed food rather than salt added while cooking.

Sodium plays many important roles in the body. It maintains fluid balance and is a main nutrient used in nerve impulse transmission and muscle contraction. Too much sodium normally leads to hypertension and kidney damage. In some populations, especially the salt-sensitive, too much salt can lead to heart attacks and other forms of cardiovascular diseases. Sodium Level in the Human Body

The normal range for blood sodium is between 135 and 145 mEq/L (3.10 mg/ml to 3.34 mg/ml). Higher levels of sodium are normally associated with hypertension. A sodium level of 150 mEq/L (3.45 mg/ml) or more is known as hypernatremia, a condition that is commonly caused by dehydration or eating too much salt. However it can also be caused by other conditions such as diabetes or hormonal imbalances. Hypernatremia has symptoms including lethargy, agitation, restlessness, irrational behavior, and in extreme cases, can cause seizures or coma.

Low blood sodium can occur due to diseases such as kidney failure, certain cancers, and excessive sweating. A sodium level of 125 mEq/L (2.88 mg/ml) or less is considered hyponatremia. Symptoms of hyponatremia include fatigue, lethargy, confusion, muscle cramps and nausea, and in extreme cases, seizures. If we ever get a chance to see pure sodium metal, we will notice that it is silvery and lustrous. Pure sodium metal is very soft and can be cut with a dull knife. It can conduct heat and electricity; however it is rarely used for this purpose. The melting point of sodium metal is 208.0 degrees Fahrenheit, and it boils at 1621.3 degrees Fahrenheit. It is not a dense metal and will float on water. The most common form of sodium has an atomic weight of 23 amu (atomic mass units). However, the average atomic weight of sodium is 22.99 amu. Like all of the alkali earth metals, sodium in its pure, metallic form, has one electron in its outermost shell that is very easily removed. Because of this, pure sodium is incredibly reactive. It will readily react with water and even oxygen in the air, producing heat and flammable hydrogen gas. In fact, simply putting a chunk of sodium metal in water makes fire! Pure sodium is often kept in mineral oil to keep it from reacting with its surroundings.

Because pure sodium is so reactive, it’s seldom found in its pure form. Sodium occurs most frequently as a cation, which is a positively charged particle. Sodium loses its one outermost electron to become a +1 cation. The sodium cation is represented as Na+.

Sodium is used as a heat exchanger in some nuclear reactors, and as a reagent in the chemicals industry. But sodium salts have more uses than the metal itself. The most common compound of sodium is sodium chloride (common salt). It is added to food and used to de-ice roads in winter. It is also used as a feedstock for the chemical industry. Sodium carbonate (washing soda) is also a useful sodium salt. It is used as a water softener.

Biological Role – Sodium is essential to all living things, and humans have known this since prehistoric times. Our bodies contain about 100 grams, but we are constantly losing sodium in different ways so we need to replace it. We can get all the sodium we need from our food, without adding any extra. The average person eats about 10 grams of salt a day, but all we really need is about 3 grams. Any extra sodium may contribute to high blood pressure. Sodium is important for many different functions of the human body. For example, it helps cells to transmit nerve signals and regulate water levels in tissues and blood.

Natural Abundance – Sodium is the sixth most common element on Earth, and makes up 2.6% of the Earth’s crust. The most common compound is sodium chloride. This very soluble salt has been leached into the oceans over the lifetime of the planet, but many salt beds or ‘lakes’ are found where ancient seas have evaporated. It is also found in many minerals including cryolite, zeolite and sodalite.

Because sodium is so reactive it is never found as the metal in nature. Sodium metal is produced by electrolysis of dry molten sodium chloride.