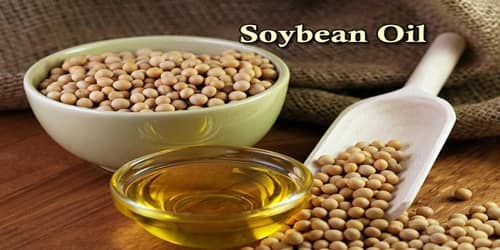 Definition: Soybean oil is extracted from soybeans and is a good source of healthy fats, including omega-3 fatty acids and polyunsaturated fats. It is processed and sold mainly as a vegetable oil, while the remaining soybean meal is typically used as animal feed. It is also the primary source of biodiesel in the country, making up 80 percent of domestic production.

Chinese records dating prior to 2000 B.C. mention use of cultivated soybeans to produce edible soy oil. Ancient Chinese literature reveals that soybeans were extensively cultivated and highly valued as a use for the soybean oil production process before written records were kept.

Soybean is native to East Asia and is considered a legume, however, despite its limited origin; it is highly prized for its edibility. Most soybean oil is refined, blended, and sometimes hydrogenated and it can be graded into different levels and strengths depending on the desired application.

Soybean oil is commonly used to make mayonnaise, salad dressing, margarine, and non-dairy coffee creamers. It is a usual feature of processed foods, which is where the problem begins: processed foods are perhaps the most damaging part of most people’s diet, contributing to the occurrence of disease and poor health. Production and Composition of Soybean oil: To produce soybean oil, the soybeans are cracked, adjusted for moisture content, heated to between 60 and 88 °C (140–190 °F), rolled into flakes, and solvent-extracted with hexanes. The oil is then refined, blended for different applications, and sometimes hydrogenated. Soybean oils, both liquid and partially hydrogenated are sold as “vegetable oil,” or are ingredients in a wide variety of processed foods. Most of the remaining residue (soybean meal) is used as animal feed. Benefits and Effects of Soybean oil: Soybean oil is considered healthier than most other vegetable oils, due to the presence of a good variety of essential fatty acids in it, which the body needs in order to remain healthy.

The main benefits of soybean oil are for food manufacturers, who are able to use cheap vegetable oils for their products. It took many years before conventional health authorities to finally warn against using trans fat.

Genetically engineered soybean oil is the worst offender. GE soybeans are linked to significant adverse health effects, including increased infertility rates with each passing generation. But even if people have organic soybean oil, it still poses several significant issues, including the following problems with soy:

Experts recommend coconut oil for cooking, as it is far superior to any other cooking oil and is loaded with healthful properties. Use organic butter (preferably made from raw milk) instead of margarine and vegetable oil spreads. Butter does not deserve a bad rap, as it offers an array of wholesome benefits.