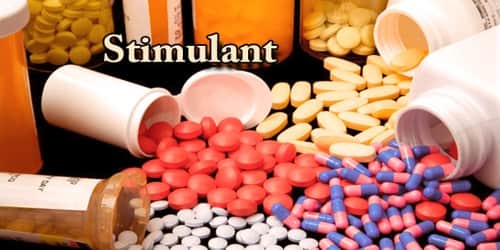 Definition: Stimulant (also often referred to as psychostimulants or colloquially as uppers), any drug that excites any bodily function, but more specifically those that stimulate the brain and central nervous system. Stimulants are widely used throughout the world as prescription medicines as well as without a prescription (either legally or illicitly) as performance-enhancing or recreational drugs.

Stimulants can have a wide variety of mechanisms. Many stimulants exert their effects through manipulations of monoamine neurotransmission. Monoamines are a class of neurotransmitter relevant in reward, motivation, temperature regulation and pain sensation that include dopamine, norepinephrine, and serotonin.

Stimulant effects can range from short-term energy boosts to long-term brain changes and/or organ system injury. The harm may be long-lasting in extreme cases, but any amount of stimulant abuse can cause damage to the user.

Types and Uses of Stimulants: Stimulants are a class of substances that increase certain types of cell signalling and amplify various physiologic processes throughout the brain and body. In particular, many types of stimulant drugs are associated with heightened dopamine release, which can result in a powerful sense of well-being, increased energy, attention, and alertness. Some of the more common types of stimulants are:

Medical Uses for Stimulants – Stimulants are effective in treating cognitive disturbances in HIV patients and in cancer patients going through cranial irradiation. Some stimulant drugs, such as Adderall and Concerta, are useful in controlling the impulsive behaviours, inattentiveness, and hyperactivity that are associated with attention-deficit/hyperactivity disorder (ADHD). Effects of Stimulant: Stimulants are generally abused for their euphoric, energetic effects. In the short term, stimulant effects can be very pleasurable and may include:

The effects of stimulant use can extend well beyond the short-term high. Many users disregard the future in favor of a blissful short-term high, but the potential harm associated with ongoing use should not be ignored.

Physical effects of stimulant abuse include:

It is important to recognize the negative consequences of stimulant abuse, as they underscore the ugly truth behind the euphoric stimulant high.