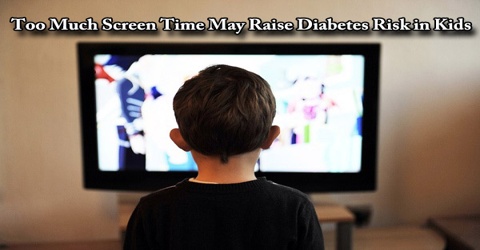 Too Much Screen Time May Raise Diabetes Risk in Kids

Too Much Screen Time May Raise Diabetes Risk in Kids

Kids who get too much screen time may be more likely to have risk factors that increase their chances of type 2 diabetes, new research says.

Watching television, playing video games or sitting in front of a computer or other device for more than three hours each day was linked to more body fat and insulin resistance. Those factors mean the body is less able to keep blood sugar levels under control, the British researchers said. However, it was not clear from older research whether or not children were also at risk though researchers did point out that the use of electronic devices was on the rise, especially in children.

Researchers in the UK analyzed data from nearly 4,500 children, and found that those who spent more time glued to the screen had biological markers known to increase the risk of type 2 diabetes. These kids showed signs that their bodies weren’t as good at processing sugar, a condition known as insulin resistance — the hallmark of diabetes. The researchers tested blood pressure, body fat, insulin resistance, blood fats and fasting blood glucose levels as well as estimated screen times including phones, computers, television and video games.

Worryingly, just 4% of those surveyed stated that screen time didn’t take up much of their day, while 37% admitted they spent an hour or less a day on electronic devices. One in five children were found to spend more than three hours a day in front of a screen. The study found strong links between increased screen times and higher body fat ratios. It was also found that levels of leptin, the hormone that controls appetite, fasting glucose and insulin resistance, were strongly affected by screen time. Commenting on their findings, the researchers advise less screen time for children to lower the risk of type 2 diabetes.

Today’s study, published in the journal Archives of Disease in Childhood, adds to the growing body of research showing that “excessive screen time is harmful to people’s health,” says Mark Tremblay, a childhood obesity researcher and healthy living expert at the Children’s Hospital of Eastern Ontario Research Institute, who did not take part in the study. “It’s discordant with our evolution.” A report published in 2015 by Common Sense Media showed that 13- to 18-year-olds spend an average of about nine hours a day consuming media through computers, smartphones, and TVs; 8- to 12-year-olds get about six hours of screen time a day. The researchers analyzed data from nearly 4,500 9- to 10-year-old kids from 200 primary schools in London, Birmingham, and Leicester who took part in the Child Heart and Health Study in England from 2004 to 2007. The kids were asked how many hours per day they spend watching TV or playing video games. The researchers found that children who reported more than three hours of screen time per day had 11 percent higher levels of insulin resistance than children who reported less than one hour per day. Insulin resistance — in which muscle, fat, and liver cells do not respond properly to insulin, a hormone that controls sugar levels in the blood — is a known risk factor for type 2 diabetes. Kids who had a lot of screen time also had higher levels of skin folds thickness and fat mass, which are indicators of total body fat, and of leptin, which is a hormone responsible for appetite.

Overall, the study shows that “reducing screen time in children may help to reduce the risks of type 2 diabetes,” Nightingale writes in an email. The study has some limitations — it only shows association, not a direct casual link between screen time and diabetes. Because the data was collected between 2004 and 2007, the study also didn’t include time spent on smartphones or tablets, so the result might underrepresent the amount of screen time kids get today. However, the findings add to the body of research showing that spending lots of time glued to screens might not be the healthiest habit — especially for children. So even though the study doesn’t show a casual link, it’s in line with what other studies are showing and it’s enough to raise some red flags. “When so many of the measures are showing the same gradient, when it’s so aligned with what common sense seems to tell us,” Tremblay says, “then at some point you’ve gotta say, ‘maybe there’s something going on here.”

The researchers found that total body fat among the kids increased along with their screen time. Specific indicators of body fat — such as skin fold thickness and fat mass — were all higher among the kids who got more than three hours of screen time each day than those who got just one hour or less. Screen time was also linked to the kids’ levels of leptin — a hormone that’s involved in appetite control and insulin resistance, the researchers said. This was true regardless of other factors that could affect the kids’ type 2 diabetes risk factors, such as household income, puberty stage and level of physical activity.

The authors noted their findings don’t prove a cause-and-effect relationship, but they could have important implications for public health as more children are routinely using electronic devices.