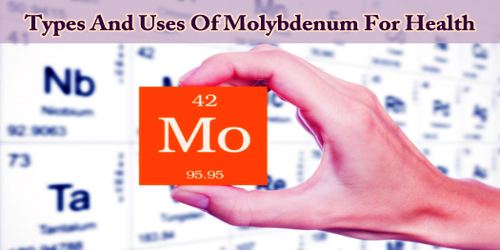 Types And Uses Of Molybdenum For Health

Molybdenum is an essential mineral, which is also found in foods such as milk, cheese, cereal grains, legumes, nuts, leafy vegetables, and organ meats. It is vital for the function of several enzymes but is easily obtained through the diet. Molybdenum deficiencies are virtually unheard of, and there are no benefits to high doses, making supplementation unnecessary. The human body requires very low quantities of molybdenum to support three groups of enzymes.

Molybdenum works in the body to break down proteins and other substances. Molybdenum deficiency is very uncommon. It has an important role in normal body functions, but there is not enough information to know how it might work for any medical condition.

Molybdenum deficiencies are extremely rare, since molybdenum is easily available through the diet, as it is found in grains and water. The body easily retains molybdenum, and only needs a few micrograms.

Molybdenum is most commonly used for molybdenum deficiency. It is also used for cancer of the esophagus, other types of cancer, Wilson disease, and other conditions, but there is no good scientific evidence to support these uses. Molybdenum supplementation is unnecessary. Due to the lack of evidence and very low risk of deficiency, molybdenum may not even need to be added to multivitamin formulas.

In the human body, it’s mainly located in the liver, kidneys, glands, and bones. It can also be found in the skin, muscles, lungs, and spleen.

There are many forms of this trace mineral, but supplements typically contain one of the following types:

Molybdenum is found in a wide variety of foods. Foods that grow above ground tend to be higher in molybdenum than foods that grow below the ground, such as potatoes or carrots.

Good sources of molybdenum include:

The body uses molybdenum to break down macronutrients, carry out vital enzyme-related processes, metabolize iron as well as prevent the accumulation of harmful substances. It is specifically known to function as a cofactor for four important enzymes, including sulfite oxidase, xanthine oxidase, aldehyde oxidase, and mitochondrial amidoxime reducing component (mARC).

It’s believed that this element may be beneficial for some of the following conditions, but there is limited evidence to date to evaluate the effectiveness of supplementing with it for these health concerns:

There are also some common non-health-related uses of this element. It’s used to create molybdenum grease (a multipurpose lubricant for general industrial applications) as well as molybdenum steel (a material employed by the oil and gas, energy, construction, and automotive industries for its strength, resistance to corrosion and high-temperature tolerance). Forms used for industrial purposes include molybdenum oxide, molybdenum trioxide, molybdenum hexacarbonyl, and molybdenum sulfide. In addition, molybdenum powder is used as a plant fertilizer.