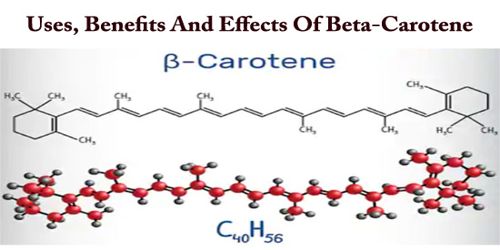 Uses, Benefits And Effects Of Beta-Carotene

Beta-Carotene (β-Carotene) is one of a group of red, orange, and yellow pigments called carotenoids. It is a member of the carotenes, which are terpenoids (isoprenoids), synthesized biochemically from eight isoprene units and thus having 40 carbons. Among the carotenes, β-carotene is distinguished by having beta-rings at both ends of the molecule. β-Carotene is biosynthesized from geranylgeranyl pyrophosphate. Beta carotene’s chemical formula – C40H56 – was discovered in 1907.

Beta-carotene is converted to vitamin A, an essential nutrient. It has antioxidant activity, which helps to protect cells from damage. The advantage of dietary beta carotene is that the body only converts as much as it needs. Excess vitamin A is toxic. Toxic vitamin A levels can occur if we consume too many supplements.

Uses and Benefits of Beta-carotene –

There are a number of ways that beta carotene can benefit human health. Below, we give some examples:

Prevent Breast Cancer and An eye disease called AMD – Eating more fruits and vegetable that contain beta-carotene seems decrease the risk of breast cancer in pre-menopausal women who are at high risk of getting breast cancer, including those with a family history and those who use alcohol excessively.

A French study involving adult females published in the Journal of the National Cancer Institute (September 2005 issue) found that smokers with high beta carotene levels had a higher risk of lung cancer and other smoking-related cancers than other smokers. They also found that non-smokers with high beta carotene intake had a lower risk of lung cancer.

They found that the risk of lung cancer over a ten-year period was:

Further research has suggested that the high intake among smokers is nearly always due to supplements, and not food intake.

Excess β-carotene is predominantly stored in the fat tissues of the body. The most common side effect of excessive β-carotene consumption is carotenodermia, a physically harmless condition that presents as a conspicuous orange skin tint arising from deposition of the carotenoid in the outermost layer of the epidermis. Adults’ fat stores are often yellow from accumulated carotenoids, including β-carotene, while infant’s fat stores are white. Carotenodermia is quickly reversible upon cessation of excessive intakes.

Beta-carotene is Possibly Unsafe when taken by mouth in high doses, especially when taken long-term. High doses of beta-carotene can turn skin yellow or orange.

β-Carotene can interact with medication used for lowering cholesterol. Taking them together can lower the effectiveness of these medications and is considered only a moderate interaction. β-Carotene should not be taken with orlistat, a weight-loss medication, as orlistat can reduce the absorption of β-carotene by as much as 30%. Bile acid sequestrants and proton-pump inhibitors can also decrease absorption of β-carotene. Consuming alcohol with β-carotene can decrease its ability to convert to retinol and could possibly result in hepatotoxicity.

Dispersed β-carotene molecules can be encapsulated into carbon nanotubes enhancing their optical properties. Efficient energy transfer occurs between the encapsulated dye and nanotube light is absorbed by the dye and without significant loss is transferred to the nanotube. Encapsulation increases chemical and thermal stability of β-carotene molecules; it also allows their isolation and individual characterization.

People who smoke or who have been exposed to asbestos are advised not to take any beta-carotene supplements.