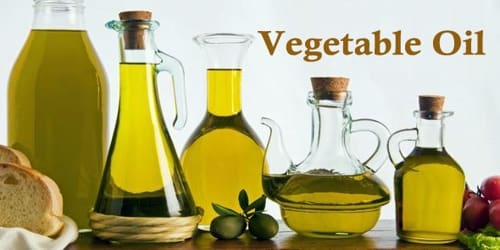 Introduction: Vegetable oil is oil that is extracted from various types of fruits, seeds, grains, and nuts (all considered vegetables for this purpose). The most popular oils are made from canola, coconut, corn, cottonseed, olive, palm, palm kernel, peanut, safflower, soybean, and sunflower. Vegetable oil is used to add flavor, assist with texture, and to cook food. In common usage, vegetable oil may refer exclusively to vegetable fats which are liquid at room temperature.

Such oils have been part of human culture for millennia. Poppy seed, rapeseed, linseed, almond oil, sesame seed, safflower, and cottonseed were used since at least the bronze age throughout the Middle East and Central Asia. In 1780, Carl Wilhelm Scheele demonstrated that fats were derived from glycerol. Thirty years later Michel Eugène Chevreul deduced that these fats were esters of fatty acids and glycerol. In modern times, cottonseed oil was marketed by Procter & Gamble as a creamed shortening in 1911.

In the mid-1970s, Canadian researchers developed a low-erucic-acid rapeseed cultivar. Because the word “rape” was not considered optimal for marketing, they coined the name “canola” (from “Canada Oil low acid”). Canola is very thin (unlike corn oil) and flavorless (unlike olive oil), so it largely succeeds by displacing soy oil, just as soy oil largely succeeded by displacing cottonseed oil.

Production and Refining Process of Vegetable Oil: Oil extraction by traditional methods often requires various preliminary operations, such as cracking, shelling, dehulling, etc., after which the crop is ground to a paste. The paste, or the whole fruit, is then boiled with water and stirred until the oil separates and can be collected. Such traditional methods have a low rate of efficiency, particularly when performed manually. Oil extracted by pressing without heating is the purest method and often produces an edible product without refining.

Modern methods of oil recovery include crushing and pressing, as well as dissolving the crop in a solvent, most commonly hexane. Extracting oil with a solvent is a more efficient method than pressing. The residue left after the removal of oil (oilcake or meal) is used as feedstuff.

First, the vegetables are crushed to extract the oil. The crushed mixture is then heated and mixed with hexane, a chemical which helps to extract the remaining oil. The solids are removed and used for animal feed, and the hexane is distilled from the crude oil.

After this process, the oil is fully refined and ready to use.

Uses of Vegetable Oil: Vegetable oils have a wide variety of food uses, including salad and cooking oils, as well as in the production of margarine, shortening and compound fat. They also enter into many processed products, such as mayonnaise, mustard, potato chips, French fries, salad dressing, sandwich spread, and canned fish.

Vegetable oil is used in the production of some pet foods. AAFCO defines vegetable oil, in this context, as the product of vegetable origin obtained by extracting the oil from seeds or fruits which are processed for edible purposes.

Vegetable oils are also used to make biodiesel, which can be used like conventional diesel. Some vegetable oil blends are used in unmodified vehicles but straight vegetable oil, also known as pure plant oil, needs specially prepared vehicles which have a method of heating the oil to reduce its viscosity. The use of vegetable oils as alternative energy is growing and the availability of biodiesel around the world is increasing.