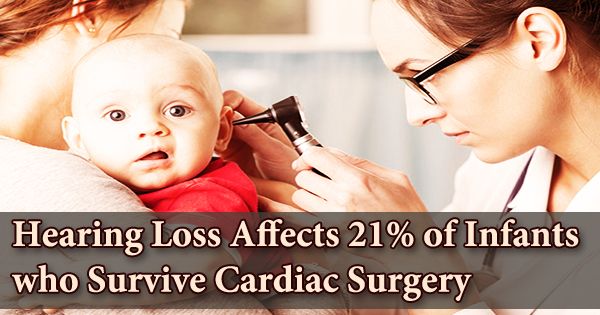 When compared to peers without heart abnormalities, children who survive cardiac surgery as babies have a 20-fold increased chance of hearing loss. The goal of this study was to look at the occurrence of hearing loss (HL) after cardiac surgery in children, the patient and operative variables linked to HL, and the link between HL and neurodevelopmental outcomes. By the age of four, children who have had heart surgery as babies are at risk for hearing loss, as well as language, attention, and cognitive difficulties.

Hearing loss was detected in around 21% of 348 preschoolers who survived heart surgery in a single-center study, which is 20 times greater than the overall population. Children who have cardiac surgery should have their hearing tested by the age of 24 to 30 months, according to the researchers, to enhance their chances of obtaining early medical assistance. Researchers looked at 4-year-olds who had congenital heart disease (CHD) surgery at Children’s Hospital of Philadelphia (CHOP) to see how it affected their neurodevelopmental results.

Hearing loss was identified in 21.6 percent of the 348 preschoolers tested, with conductive hearing loss (12.4 percent), sensorineural hearing loss (6.9%), and indeterminate hearing loss being the most prevalent (2.3 percent). The research was done as part of a prospective observational study of neurodevelopmental (ND) outcomes in preschool-aged children who had congenital heart defect surgery as a baby. The study was published in the Journal of Pediatrics in January 2017.

“Children born with life-threatening heart defects require a great deal of sophisticated care before and after surgery,” said study leader Nancy B. Burnham, RN, MSN, CRNP, a nurse practitioner in the Division of Cardiothoracic Surgery at Children’s Hospital of Philadelphia (CHOP). “This study reminds healthcare providers not to overlook hearing evaluations because early detection and intervention can reduce later problems in neurodevelopment.”

According to principal research author Nancy B. Burnham, RN, MSN, CRNP, and colleagues, the total rate of hearing loss was nearly 20 times greater than the general population. Between 2003 and 2008, 348 children under the age of four received a complete neurodevelopmental examination, which was published in the Journal of Pediatrics. Children who have heart surgery should have their hearing tested by the time they are 24 to 30 months old, according to the researchers, to enhance the chances of prompt intervention. Before the researchers assessed them at age 4, just 5.2 percent of the study group had tested positive for hearing loss.

Based on the existence and kind of HL, a prevalence estimate was computed. The influence of HL on ND outcomes was assessed as well as potential risk factors. Pediatric cardiologists have switched their attention to long-term quality of life as surgical methods have significantly improved survival for newborns with complicated heart abnormalities. Neurodevelopmental problems, including as learning impairments, are reported to be more common among survivors. This is the first research in this group to look at hearing loss and its effects on neurodevelopment.

Hearing loss was discovered in 21.6 percent of the group, according to the researchers (75 of the 348 children). Gestational age of less than 37 weeks, a verified genetic abnormality, and a lengthier postoperative length of stay were all potential risk factors for hearing loss. There was no link to surgical management parameters that could be changed. Language abilities, cognition (IQ tests), executive function, and attention were all worse in children with hearing loss.

Hearing loss has been linked to a younger gestational age, genetic abnormalities, and a longer postoperative length of stay. Although the research did not specifically evaluate either potential risk factor, the authors cite high-frequency sounds in critical care units and exposure to medicines with hearing-damaging side effects as probable factors to hearing loss in their patients. Before the operation, the researchers had no idea how many of the youngsters suffered hearing loss.

Another research drawback is that conductive hearing loss affected more than half of the 75 children with hearing loss, which can be transitory when caused by diseases such as middle ear infections. According to the researchers, any kid who has had heart surgery before the age of six months should have at least one audiologic assessment before the age of 24 to 30 months to detect hearing loss early. This study’s prevalence rate of 21.6 percent compared to an anticipated prevalence rate of 1% in all preschool-aged children.

According to national guidelines issued by the Joint Committee on Infant Hearing, all newborns should be screened for hearing loss by one month of age, with diagnosis by three months and intervention services beginning by six months, according to study co-author Carol Knightly, AuD, CCC-A, Senior Director of the Center for Childhood Communication at CHOP. Such newborn screening for hearing loss is already the standard of care at CHOP.

These data imply that the prevalence of HL in preschool children after infancy heart surgery might be 20 times greater than the 1% prevalence reported in the general population. Future studies should involve bigger, multi-center groups of juvenile cardiac patients, according to Burnham, in order to confirm the current findings and look into methods to change treatment variables that may lead to hearing loss.

The National Institutes of Health (projects HL071834, NS072338, and NS060653), the American Heart Association, and the June and Steve Wolfson Family Foundation all contributed to this research.