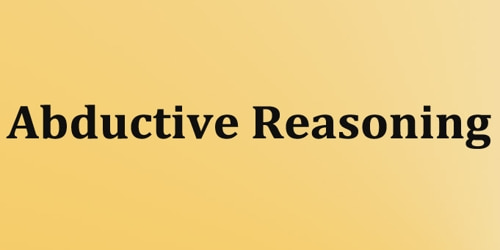 In the philosophical literature, the term “abduction” is used in two related but different senses. In both senses, the term refers to some form of explanatory reasoning.

Most philosophers agree that abduction (in the sense of Inference to the Best Explanation) is a type of inference that is frequently employed, in some form or other, both in every day and in scientific reasoning.

Abductive reasoning comes in various guises. It can be seen as a way of generating explanations of phenomena meeting certain conditions. One handy way of thinking of it is as “inference to the best explanation”. The exact nature of abduction and the principles for demarcating good and bad abduction is still somewhat of a mystery.

The term “abduction” also sometimes only refers to the generation of hypotheses that explain observations or conclusions, but the former definition is more common both in philosophy and computing.

Aristotle discussed abductive reasoning (apagoge, Greek) in his Prior Analytics. Charles Peirce formulated abduction as a method of scientific research and introduced it into modern logic. The concept of abduction is applied beyond logic to the social sciences and the development of artificial intelligence. There are three kinds of logical reasoning in logic: Deduction, induction, and abduction.

O follows from E and T;

E is consistent with T.

In formal logic, O and E are assumed to be sets of literals. The two conditions for E being an explanation of O according to theory T are formalized as:

T U E is consistent.

Among the possible explanations E satisfying these two conditions, some other condition of minimality is usually imposed to avoid irrelevant facts (not contributing to the entailment of O) being included in the explanations. Abduction is then the process that picks out some member of E. Criteria for picking out a member representing “the best” explanation includes the simplicity, the prior probability, or the explanatory power of the explanation.

Applications in artificial intelligence include fault diagnosis, belief revision, and automated planning. The most direct application of abduction is that of automatically detecting faults in systems: Given a theory relating faults with their effects and a set of observed effects, abduction can be used to derive sets of faults that are likely to be the cause of the problem.

Abduction can also be used to model automated planning. Given a logical theory relating action occurrences with their effects (for example, a formula of the event calculus), the problem of finding a plan for reaching a state can be modeled as the problem of abducting a set of literals implying that the final state is the goal state.