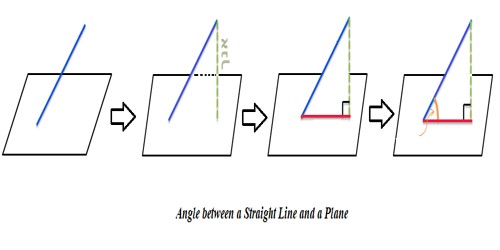 Angle between a Straight Line and a Plane

Angle between a Straight Line and a Plane:

In mathematics, the term “line” actually refers to the “straight line”. It is a one-dimensional figure that extends in two opposite directions. A straight line can be defined as an interconnected set of an infinite number of points. The length of a line is infinite, while it has zero or no width as well as height. A line segment is represented by placing an arrow at each end. Both ends can be named by an uppercase letter. We may also denote a line by a lower case letter (such as l, m, n) which is written on either end of it. In above image, the name of the line segment is PR, whereas the point Q indicates that these three points are collinear.

A plane is said to be a two-dimensional flat figure. It is an extension of a point and a line. When infinite sets of points form together to make a flat surface, it is known as a plane. It extends infinitely in all directions. It does have an infinite length as well as width, but no thickness or height.