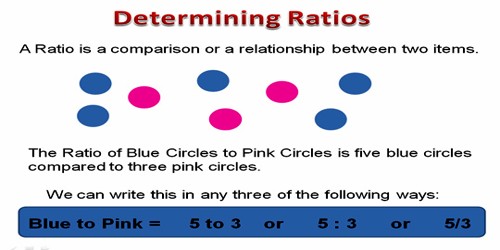 Definition: Ratios are used to compare values. In mathematics, a ratio is a relationship between two numbers indicating how many times the first number contains the second. The ratio of two like quantities a and b is the fraction a/b, which indicates how many times b is the quantity a. In other words, their ratio indicates their relative sizes.

If x and y are two quantities of the same kind and with the same units such that y ≠ 0; then the quotient x/y is called the ratio between x and y.