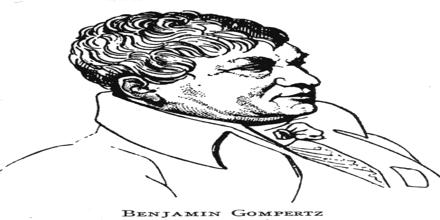 Benjamin Gompertz was a British self-educated mathematician. He was learning mathematics by reading Newton and Maclaurin. He came from a family of merchants who left Holland and settled in England. He was one of three sons born in England to a Dutch family which, although from Holland, was Jewish. Gompertz was a founder member of the Royal Statistical Society in 1834. He is now best known for his Gompertz law of mortality, a demographic model published in 1825. He published the mathematical work Hints on Porisms in 1850 and contributed a paper on the topic for which he is most famed, namely human mortality, to the International Statistical Congress of 1860.