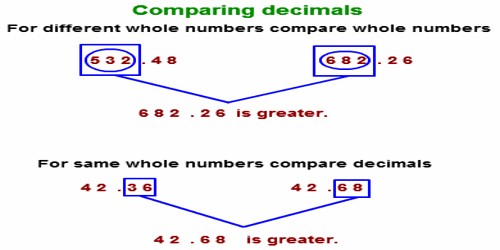 If there are two decimal numbers we can compare them. One number is either greater than, less than or equal to the other number.

Therefore, when decimals are compared start with tenths place and then hundredths place, etc. If one decimal has a higher number in the tenths place then it is larger than a decimal with fewer tenths. If the tenths are equal compare the hundredths, then the thousandths etc. until one decimal is larger or there are no more places to compare. If each decimal place value is the same then the decimals are equal.

The process of comparing decimal numbers is actually exactly the same process for comparing whole numbers, although students might not appreciate this to be the case. Instead of focusing on place value, students might be distracted by the ‘length’ of the whole numbers, and hence base their perception of the relative size of whole numbers on the relative number of digits involved. For example, they might say that “1576 is larger than 742 as it is contains more digits” or “1576 is bigger than 742 as it is longer”. While this strategy will provide correct answers for whole numbers, this lack of focus on place value is likely to lead to similar (but incorrect) strategies for comparing decimal numbers. For example, some students think that long decimals are usually large numbers, and surprisingly, some think that long decimals are usually small numbers.

First, compare the whole numbers to the left of the decimal point.

If they are not the same, the smaller decimal number is the one with the smaller whole number.

On the other hand, if they are the same, compare the whole number to the right of the decimal point.

The smaller decimal number is the one with the smaller whole number on the right of the decimal point, for instance, compare 60.802 with 60.504 Sometimes, they may not have the same number of decimal places to the right of the decimal point.

Just add zero(s) in this case!