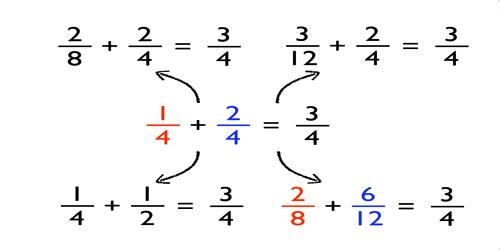 A Fraction consists of two numbers separated by a line.

The top number (or numerator) tells how many fractional pieces there are. The fraction 3/8 indicates that there are three pieces.

If the numerators of two fractions are the same, the fraction with the smaller denominator is the larger fraction.

For example 5/8 is larger than 5/16 because each fraction says there are five pieces but if an object is divided into 8 pieces, each piece will be larger than if the object were divided into 16 pieces. Therefore, five larger pieces are more than five smaller pieces. Find the least common multiple (LCM) of the denominators. The LCM of two numbers is the smallest number that is evenly divisible by both numbers. You’ll need to find the LCM of 4 and 3, which will give you the lowest common denominator (LCD) of the fraction.

Simplify your answer. Once you have your answer, check to see if you can simplify it. If the numerator and denominator can be divided by the same number, divide them by that number. Remember that fractions are proportions, so whatever you do to the numerator, you must also do to the denominator.