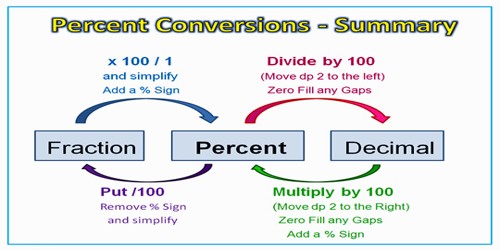 Converting Percent to Fraction and Decimal

Converting Percent to Fraction and Decimal

When we talk, we often use different words to express the same thing. For example, we could describe the same car as tiny or little or small. All of these words mean the car is not big. Fractions, decimals, and percents are like the words tiny, little, and small. They’re all just different ways of expressing parts of a whole.

Converting a Percent to a Fraction

Do the following steps to convert a percent to a fraction:

For example: Convert 83% to a fraction.

Step 3: Simplify (or reduce) the fraction

Converting a Decimal to a Percent

Do the following steps to convert a decimal to a percent:

Converting a Percent to a Decimal

When we turn a percent into a decimal, we’re actually doing two steps. First, we convert our percent into a fraction. Since all percents are out of 100, we just put the percent over 100, like this:

You know that all percents are out of 100, so you can skip making the percent into a fraction. You have to divide the percent by 100 to get a decimal, but there’s a quick way to do that. Just move the decimal point two spaces to the left! This way, you can get the same answer with just one easy step.

How to convert a percent to a decimal:

For example: Convert 83% to a decimal.