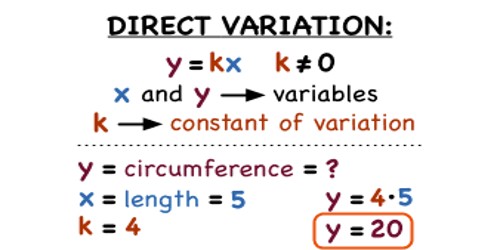 “Variation” defines a concept that deals with variability in mathematics. Variation is defined by any change in some quantity due to change in another. We often come across with different types of variation problems in mathematics. Variation problems involve fairly simple relationships or formulas, involving one variable being equal to one term. Here follow the most common kinds of variation.

This is symbolically written as A ∝ B (read as ‘A varies as B’ ).

Like in a math examination if for one problem solving we can score 10 numbers, so five problems solving we can get 50 numbers. This can be explained by a direct variation equation. If T denotes total numbers scored, N denotes numbers of the problem solved and K denotes numbers can be scored for solving a problem, then the direct variation equation for this situation will be T = KN.

From the above example, we can understand that the ratio of two variables is a constant K and T, N are the variables which changes in proportion to a value of constant.

Now we will solve some problems on direct variation:

As P varies directly with Q, ratio of P and Q is constant for any value of P and Q.

So the equation that describes the direct variation of P and Q is P = 3/2 Q.

For the case given in the problem,

So the speed of the car is 60kmph and it is constant.