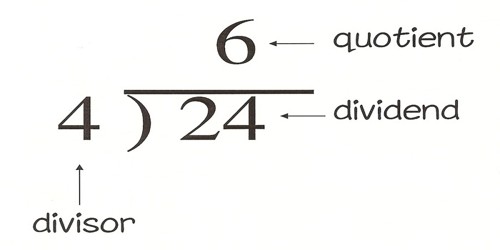 In division, a dividend is divided by a divisor to find a quotient.

In the following equation, 18 is the dividend, 3 is the divisor, and 6 is the quotient.

If there is an amount left over, it is called the remainder. The remainder cannot be evenly divided by the divisor. For example, if you divide 18 by 7, you will get a remainder: A division problem may be written vertically.

Each of the terms used in division are explained below: