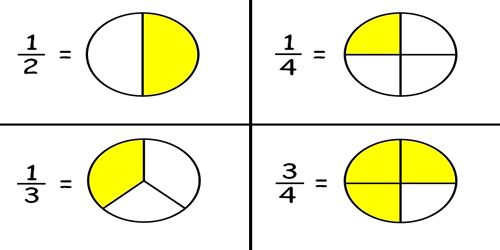 When an object is divided into a number of equal parts then each part is called a fraction. Fractions are rational numbers that are written with a numerator and a denominator. It is a numerical representation (such as ½, ¼, or 3.234) indicating the quotient of two numbers.

You can recognize a fraction by the slash that is written between the two numbers. We have a top number, the numerator, and a bottom number, the denominator. For example, 1/2 is a fraction. You can write it with a slanted slash like we have or you can write the 1 on top of the 2 with the slash between the two numbers. The 1 is the numerator, and the 2 is the denominator. Here are some other important fraction terms to review:

Reciprocal: the multiplicative inverse of a number. For a fraction, it’s obtained by “turning the fraction over.” When the product of two fractions equals 1, the fractions are reciprocals. Every nonzero fraction has a reciprocal.