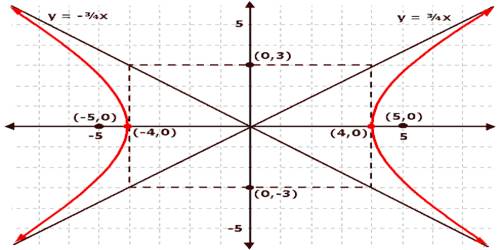 Hyperbola is asymmetrical open curve formed by the intersection of a circular cone with a plane at a smaller angle with its axis than the side of the cone. A hyperbola is a curve where the distances of any point from: (a) Its centre is the origin and transverse and conjugate axes are along x and y-axes respectively ; its length of transverse axis = 2a and that of conjugate axis = 2b and eccentricity = e = √[1 + (b2/a2)].

(ii) Other forms of the equations of hyperbola:

Its centre is the origin and transverse and conjugate axes are along y and x-axes respectively.

are conjugate to one another. If e1 and e2 be the eccentricities of the hyperbolas (2) and (3) respectively, then