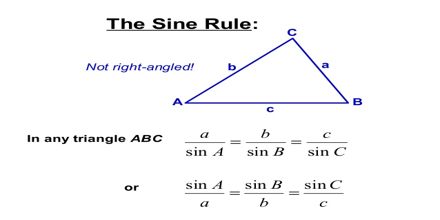 Lecture on the Sine Rule

Major purpose of this lecture is to present on the Sine Rule. The Sine Rule is used to solve any problems involving triangles when at least either of the following is known: (a) two angles and a side and (b) two sides and an angle opposite a given side. We can use the sine rule when we are given: Two sides and an angle opposite to one of the two sides. Remember: Use the formula which has the unknown at the top of the fraction. The angles in a triangle add to 180°.