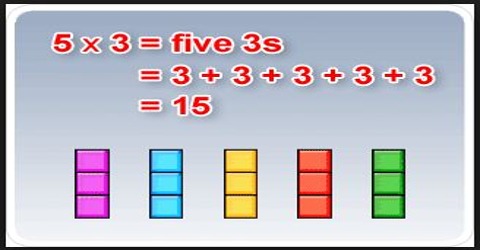 Multiplication is defined as meaning that you have a certain number of groups of the same size. Then, it can be solved by repeated addition.

The same result is also obtained by multiplication operation. Since 4 is being repeatedly added take 4 and multiply it with the number of groups which is 6.

Here 4 and 6 care called as factors and the resulting number is called as product. The way multiplication is related to repeated addition can be explained in this way, i.e. multiplying a × b is the same as adding a repeatedly b number of times.

For example, for objects arranged in 4 rows and 5 columns (20 in all);

When you multiply, you add equal groups together to find the total.