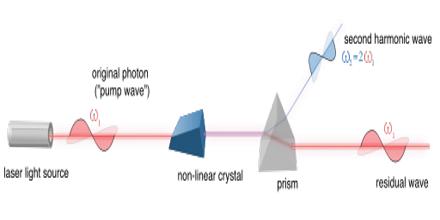 Nonlinear Optics is a branch of optics which studies the nonlinear interactions of electromagnetic radiation and the media. It is typically only observed at very high light intensities such as those provided by lasers. Above the Schwinger limit, the vacuum itself is expected to become nonlinear. In nonlinear optics, the superposition principle no longer holds. The nonlinear interaction, which means the matter responds in a nonlinear manner to the incident radiation fields, endows the media a characterization to change the wavelength, or the frequency of the incident electromagnetic waves.