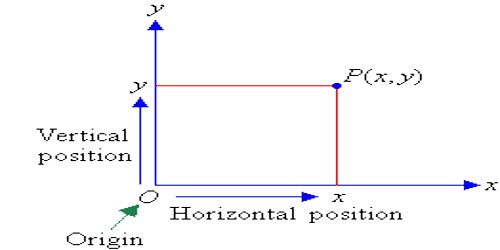 Position of a Point in a Plane

Position of a Point in a Plane

We know that the position of a point in a plane is given by its coordinates.

In the adjoining figure, XOX’ and YOY’ are two intersecting and mutually perpendicular straight lines. Together, the two lines form the frame of reference in the Cartesian x-y plane for which

(iii) O is called the origin.

The x-axis and the y-axis divide the x-y plane into four parts, called quadrants, as shown in the figure. Projection of a point onto a plane

A given point A(x0, y0, z0) and its projection A’ determine a line of which the direction vector s coincides with the normal vector N of the projection plane P.

As the point A’ lies at the same time on the line AA’ and the plane P. the coordinates of the radius (position) vector of a variable point of the line written in the parametric form These variable coordinates of a point of the line plugged into the equation of the plane will determine the value of the parameter t such that this point will be, at the same time. on the line and the plane.