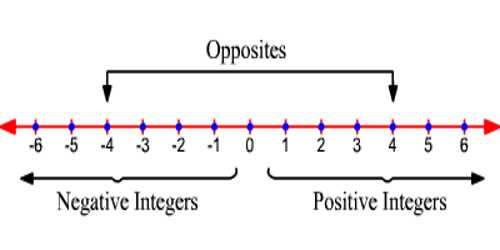 For example: Negative integer of 4 is -4. Positive integers are actually part of a larger group of numbers called integers. Integers are all the whole numbers, both positive and negative. By whole numbers we mean numbers without fractions or decimals. You can also call positive integers your ‘counting numbers’ because they are the same. You don’t count with fractions or decimals or negative numbers.

On a number line, positive integers are all the numbers to the right of the zero.

Example: Find the three consecutive positive integers whose sum is 18.

Let x be the first positive integer. Then x + 1 and x + 2 are the other integers.

According to the statement:

All integers (either positive or negative) have a counterpart that is the same distance to zero, but is on the other side of zero. This is one of the characteristics of integers, where we say that all integers have “opposite” counterparts. For example, -7 and +7 are the same distance from zero, so we say that they are opposites of each other. There is no distance between zero and itself, and it’s neither to the left nor the right of itself, so once again we say that zero is neither positive nor negative!