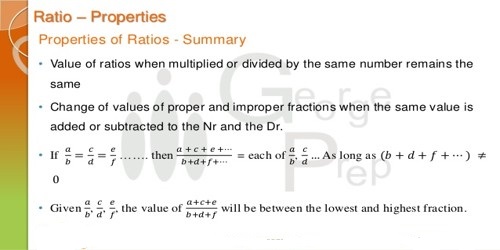 When comparing two quantities (of the same kind), sometimes it is necessary to find out the relationship that one quantity bears to another, this comparison is made by considering what multiple, part or parts, one quantity is of the other. This particular relationship between the two quantities (of the same kind) is called a ratio. As is evident by the explanation, a ratio does not have any units.

Some of the important properties of ratios are discussed here.

The second term of a ratio cannot be zero.

3. The ratio of two unlike quantities is not defined. For example, the ratio between 5 kg and 15 meters cannot be found.

4. Ratio is a pure number and does not have any unit.

5. If both the terms of a ratio are multiplied by the same non-zero number, the ratio remains unchanged.

If two terms of a ratio be multiplied by any number except zero, then there is no change in the value of the ratio because; m : n = m/n = km/kn= km : kn

If both the terms of a ratio are divided by the same non-zero number, the ratio remains unchanged.

In other words, the ratio of m and n is the same as the ratio of the quantities km and kn, or mkmk and nknk, where k ≠ 0.

8. A ratio must always be expressed in its lowest terms.

In other words, the order of the terms in a ratio is important.