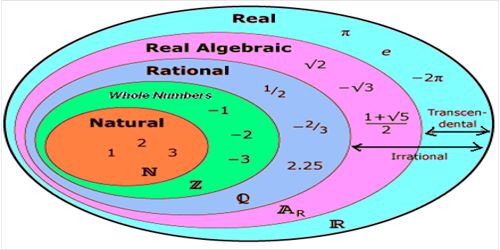 Real Numbers include all the rational and irrational numbers and can be positive, negative or zero. The Real Numbers had no name before Imaginary Numbers were thought of. They got called “Real” because they were not imaginary. The type of number we normally use, such as 1, 15.82, −0.1, 3/4, etc.

Positive or negative, large or small, whole numbers or decimal numbers are all Real Numbers. They are called “Real Numbers” because they are not Imaginary Numbers.

A proper explanation of the real numbers nowadays is covered, if at all, in a course in “real analysis” in the junior or senior year of students who are majoring in mathematics. Surprisingly few students take such a course; perhaps that’s because it is too algebraic for the analysts’ taste and too analytic to please the algebraists. Real numbers can be ordered (this is not true, for instance, of imaginary numbers) They can be added, subtracted, multiplied and divided by nonzero numbers in an ordered way.