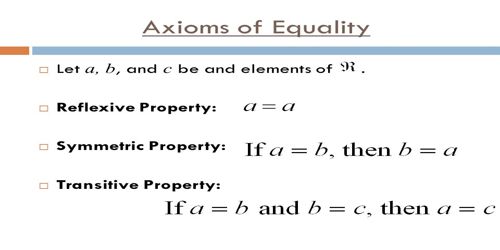 An Axiom is a mathematical statement that is assumed to be true. There are four rearrangement axioms and two rearrangement properties of algebra. n mathematics, equality is a relationship between two quantities or, more generally two mathematical expressions, asserting that the quantities have the same value, or that the expressions represent the same mathematical object. The equality between A and B is written A = B, and pronounced A equals B. The symbol “=” is called an “equals sign”. Thus there are three kinds of equality, which are formalized in different ways.

These may be thought of as the logical, set-theoretic and algebraic concepts of equality respectively.

Symmetric Axiom: Numbers are symmetric around the equals sign. If a = b then b = a. This is the second axiom of equality. It follows Euclid’s Common Notion One: “Things equal to the same thing are equal to each other.”