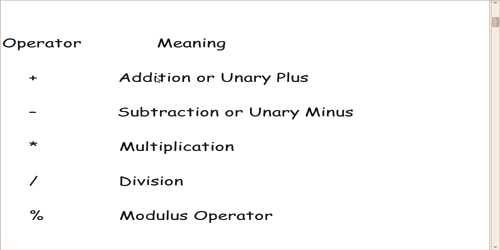 In set theory, a unary operation on set A is a function A → A.

More generally, a unary operation is a function with exactly one operand, such as the factorial, square root, or NOT. As unary operations have only one operand they are evaluated before other operations containing them in common mathematics (because certain programming languages do not abide by such rules). Here is an example using negation:

These two unary operations, ‘+’ and ‘-‘, have precedence over all binary operations. To see this, let’s look at a situation which is often termed a ‘double negative’ or stated as ‘two negatives make a positive’. Consider this expression:

In this expression there are two operators that look like this: ‘-‘. They are not the same. The first one, (left most), is the binary subtraction operator. The other, (right before the 2), is the unary negative sign operator. Here the first ‘−’ represents the binary subtraction operation, while the second ‘−’ represents the unary negation of the 2 (or ‘−2’ could be taken to mean the integer −2). Therefore, the expression is equal to:

Technically there is also a unary positive but it is not needed since we assume a value to be positive:

Unary positive does not change the sign of a negative operation:

In this case a unary negative is needed to change the sign: