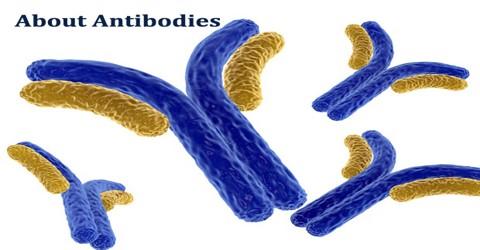 Antibodies are secreted by B cells of the adaptive immune system, mostly by differentiated B cells called plasma cells. Antibodies can occur in two physical forms, a soluble form that is secreted from the cell to be free in the blood plasma, and a membrane-bound form that is attached to the surface of a B cell and is referred to as the B-cell receptor (BCR). The BCR is found only on the surface of B cells and facilitates the activation of these cells and their subsequent differentiation into either antibody factories called plasma cells or memory B cells that will survive in the body and remember that same antigen so the B cells can respond faster upon future exposure. The antibodies act sort of like the immune system’s scouts. They find antigens, stick to them, and identify for the immune system the exact type of antigen so that it can be destroyed. Each antibody is made for one and only one antigen, and it’s fitted with special receptors that will only bind to that antigen. For instance, a specific antibody is created to help destroy the chickenpox virus. Only that particular antibody will attack a chickenpox virus.

Immunizations take advantage of the fact that antibodies remain in the body after an infection is eradicated. Most immunizations consist of a weak or diluted form of an antigen – not enough of the antigen to make the patient sick, but just enough to trigger the creation of antibodies. This way, the body can instantly attack any form of the infection it encounters, stopping the infections before they begin.

Antibodies all have the same basic structure consisting of two heavy and two light chains forming two Fab arms containing identical domains at either end attached by a flexible hinge region to the stem of the antibody, the Fc domain, giving the classical ‘Y’ shape. The constant region determines the mechanism used to destroy antigen. Antibodies are divided into five major classes, IgM, IgG, Iga, IgD, and IgE, based on their constant region structure and immune function.

The HV regions directly contact a portion of the antigen’s surface. For this reason, HV regions are also sometimes referred to as complementarity determining regions, or CDRs. The FR regions form a beta-sheet structure which serves as a scaffold to hold the HV regions in position to contact antigen. The two structural portions of the antibody, i.e. the variable (Fab) and the constant (Fc) fragments, impart distinct biological functions. These functions are outlined as follows: