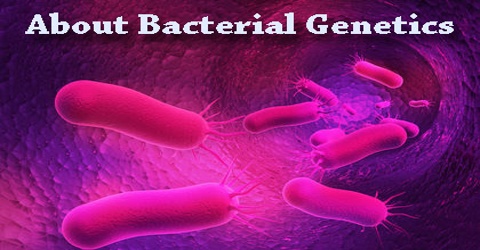 Genetics is the study of genes including the structure of genetic materials, what information is stored in the genes, how the genes are expressed and how the genetic information is transferred. Bacterial genetics is the study of the mechanisms of heritable information in bacteria, their chromosomes, plasmids, transposons and phages. Techniques that have enabled this discipline are culture in defined media, replica plating, mutagenesis, transformation, conjugation and transduction. It is the subfield of genetics devoted to the study of bacteria. Bacterial genetics are subtly different from eukaryotic genetics, however bacteria still serve as a good model for animal genetic studies. One of the major distinctions between bacterial and eukaryotic genetics stems from the bacteria’s lack of membrane-bound organelles (this is true of all prokaryotes. While it is a fact that there are prokaryotic organelles, they are never bound by a lipid membrane, but by a shell of proteins), necessitating protein synthesis occur in the cytoplasm.

There are hundreds of thousands of bacterial species in existence on Earth. They grow relatively quickly, and most reproduce by binary fission, the production of two identical daughter cells from one mother cell. Therefore, each replication cycle doubles the number of cells in a bacterial population. Bacteria do not mate (in the usual way), so there is no way of getting all the chromosomes of two different bacteria into the same cell. Bacterial conjugation refers to the transfer of DNA between bacterial cells that requires cell-to-cell contact. There are many different conjugal plasmids carried by members of most bacterial species. Conjugal plasmids that carry antibiotic resistance genes are called R factors. However, conjugative plasmids also express transfer functions that allow the movement of DNA from a donor to a recipient cell; this is the process of conjugation. Bacterial conjugation is often regarded as the bacterial equivalent of sexual reproduction or mating since it involves the exchange of genetic material. During conjugation the donor cell provides a conjugative or mobilizable genetic element that is most often a plasmid or transposon. Most conjugative plasmids have systems ensuring that the recipient cell does not already contain a similar element.

The genetic information transferred is often beneficial to the recipient. Benefits may include antibiotic resistance, xenobiotic tolerance or the ability to use new metabolites. Such beneficial plasmids may be considered bacterial endosymbionts. Other elements, however, may be viewed as bacterial parasites and conjugation as a mechanism evolved by them to allow for their spread. Bacterial Transformation was first observed in 1928 by F. Grffith and later (in 1944) examined at the molecular level by O. Avery and his colleagues who used the process to demonstrate that DNA was the genetic material of bacteria. Some bacteria have evolved systems that transport free DNA from the outside of the bacterial cell into the cytoplasm. These bacterial are called “naturally competent” for DNA transformation. Natural DNA transformation of Streptococcus pneumonaiae provided the first proof that DNA encoded the genetic material in experiments by Oswald Avery and colleagues. Some other naturally competent bacteria include Bacillus subtilis, Haemophilus influenzae, and Neisseria gonorrhoeae. Other bacterial species such as E. coli are not naturally competent for DNA transformation. Scientists have devised many ways to physically or chemically force noncompetant bacteria to take up DNA. These methods of artificial DNA transformation form the basis of plasmid cloning in molecular biology.

However bacteria that are not naturally competent can be treated in such a way to make them competent, usually by treatment with calcium chloride, which make them more permeable.

During natural DNA transformation, doubled-stranded DNA is bound to the recipient cell surface by a protein receptor. One strand of the DNA is transported through the cell envelope, where it can recombine with similar sequences present in the recipient cell. Bacteriophage are viruses that parasitize bacteria and use their machinery for their own replication. During the process of replication inside the host bacteria the bacterial chromosome or plasmid is erroneously packaged into the bacteriophage capsid.

Life cycle of bacteriophage may either by lytic or lysogenic. In the former, the parasitized bacterial cell is killed with the release of mature phages while in the latter the phage DNA gets incorporated into the bacterial chromosome as prophage.

Following are the stages of transduction involving a lytic phage: