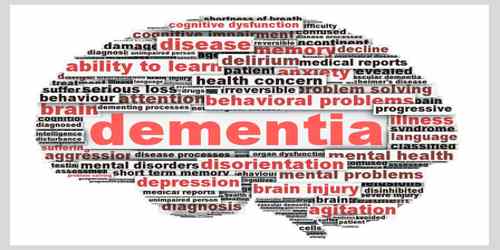 Dementia is a syndrome (a group of related symptoms) associated with an ongoing decline of brain functioning. Criteria for the diagnosis of dementia include impairment of attention, orientation, memory, judgment, language, motor and spatial skills, and function. By definition, dementia is not due to major depression or schizophrenia. A dementia diagnosis requires a change from a person’s usual mental functioning and a greater decline than one would expect due to aging. These diseases also have a significant effect on a person’s caregivers. Alzheimer’s disease is the most common cause of dementia. Other causes include AIDS, alcoholism, brain injury, vascular dementia (damage to the blood vessels leading to the brain), and dementia with Lewy bodies, brain tumors, drug toxicity, and infection of brain, Creutzfeldt – Jakob disease, meningitis, Pick disease, syphilis, and hypothyroidism.

There is no cure for dementia. Cholinesterase inhibitors such as donepezil are often used and may be beneficial in mild to moderate disorder. Overall benefit, however, may be minor. There are many measures that can improve the quality of life of people with dementia and their caregivers.

While most changes in the brain that cause dementia are permanent and worsen over time, thinking and memory problems caused by the following conditions may improve when the condition is treated or addressed: The symptoms of dementia vary across types and stages of the diagnosis. The most common affected areas include memory, visual-spatial, language, attention and problem solving. Most types of dementia are slow and progressive. By the time the person shows signs of the disorder, the process in the brain has been happening for a long time. It is possible for a patient to have two types of dementia at the same time. Additional psychological and behavioral problems that often affect people who have dementia include:

Many dementias are progressive, meaning symptoms start out slowly and gradually get worse. See a doctor soon to determine the cause. Professional evaluation may detect a treatable condition. And even if symptoms suggest dementia, early diagnosis allows a person to get the maximum benefit from available treatments and provides an opportunity to volunteer for clinical trials or studies. It also provides time to plan for the future.

Diagnosis and Treatment of Dementia

A diagnosis can help people with dementia get the right treatment and support, and help those close to them to prepare and plan for the future. With treatment and support, many people are able to lead active, fulfilled lives. The symptoms of dementia tend to worsen with time. In the much later stages of dementia, people will be able to do far less for themselves and may lose much of their ability to communicate. Treatment of dementia depends on its cause. In the case of most progressive dementias, including Alzheimer’s disease, there is no cure and no treatment that slows or stops its progression. But there are drug treatments that may temporarily improve symptoms. The same medications used to treat Alzheimer’s are among the drugs sometimes prescribed to help with symptoms of other types of dementias. Non-drug therapies can also alleviate some symptoms of dementia.

A number of factors can decrease the risk of dementia. A group of efforts is believed to be able to prevent a third of cases and include early education, treating high blood pressure, preventing obesity, preventing hearing loss, treating depression, being active, preventing diabetes, not smoking, and preventing social isolation.