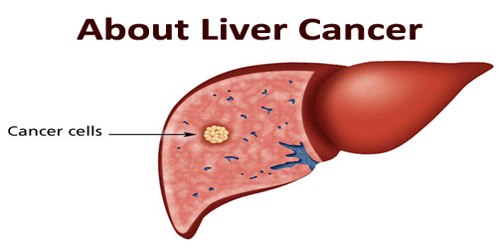 Liver cancer is a cancer which starts in the liver, rather than migrating to the liver from another organ or section of the body. In other words, it is a primary liver cancer. It is also known as hepatic cancer and primary hepatic cancer. Cancers that originate elsewhere and eventually reach the liver are known as liver metastasis or secondary liver cancers, and are most commonly from cancer of the gastrointestinal (GI) tract (colon cancer), lung cancer, renal cancer (cancer of the kidney), ovarian cancer and prostate cancer. The liver performs many other important functions, such as removing toxins and other chemical waste products from the blood and readying them for excretion. Because all the blood in the body must pass through it, the liver is unusually accessible to cancer cells traveling in the bloodstream.

The leading cause of liver cancer is cirrhosis due to hepatitis B, hepatitis C, or alcohol. Other causes include aflatoxin, non-alcoholic fatty liver disease, and liver flukes. Symptoms of liver cancer may include a lump or pain in the right side below the rib cage, swelling of the abdomen, yellowish skin, easy bruising, weight loss, and weakness. Preventive efforts include immunization against hepatitis B and treating those infected with hepatitis B or C. Screening is recommended in those with chronic liver disease. Treatment options may include surgery, targeted therapy, and radiation therapy. In certain cases ablation therapy, embolization therapy, or liver transplantation may be used. Small lumps in the liver may be closely followed.

The World Health Organization (WHO) estimate that liver cancer’s prevalence is around 30 cases per 100,000 people worldwide, with rates in parts of Africa and Eastern Asia being particularly high.

The exact cause of liver cancer is unknown, but most cases are associated with damage and scarring of the liver known as cirrhosis. Cirrhosis can have a number of different causes, including:

It’s also believed obesity and an unhealthy diet can increase the risk of liver cancer because this can lead to non-alcoholic fatty liver disease. Diagnosis and Treatment of Liver Cancer

Liver cancer, if not diagnosed early is much more difficult to remove. The only way to know whether people have liver cancer early on is through screening, because symptoms are either slight or nonexistent. Diagnostic tests for liver cancer include: Treatment for liver cancer depends on the stage the condition is at. If diagnosed early, it may be possible to remove the cancer completely.

Treatment options in the early stages of liver cancer include: Radiotherapy is not often used in HCC because the liver is not tolerant to radiation. Although with modern technology it is possible to provide well-targeted radiation to the tumor, minimizing the dose to the rest of the liver. Dual treatments of radiotherapy plus chemoembolization, local chemotherapy, systemic chemotherapy or targeted therapy drugs may show benefit over radiotherapy alone.

However, only a small proportion of liver cancers are diagnosed at a stage where these treatments are suitable. Most people are diagnosed when the cancer has spread too far to be removed or completely destroyed.

Prevention of cancers can be separated into primary, secondary, and tertiary prevention. Primary prevention preemptively reduces exposure to a risk factor for liver cancer. One of the most successful primary liver cancer preventions is vaccination against hepatitis B. Vaccination against the hepatitis C virus is currently unavailable. Other forms of primary prevention are aimed at limiting transmission of these viruses by promoting safe injection practices, screening blood donation products, and screening high-risk asymptomatic individuals. Tertiary prevention includes treatments to prevent the recurrence of liver cancer. These include the use of chemotherapy drugs and antiviral drugs.